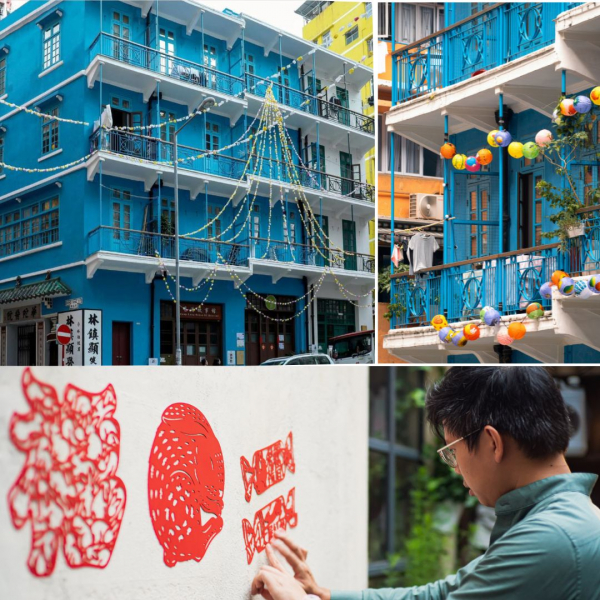 The Blue House is a traditional tenement building on Hong Kong Island. The original site was that of the first hospital, 'Wah To Hospital', that was built in the 1870s in Wanchai. The Blue House was built in 1920 and is a four-storey building with the former "Hua Tuo Temple" underground. It is now listed as a first-class historic building in Hong Kong. It is one of the few remaining tenement buildings constructed of terraced buildings in Hong Kong.

In addition to being a professional heritage architect, Nicholas resides in the Blue House. On your tour of the Blue House, he takes you around the exterior of the building, shows the distinctive blue exterior walls and the fine wooden door of the old shop. Inside the buildings, he shows the high and steep wooden stairs and elegant original floor tiles of this historical building.

Members can get a glimpse of the early co-living culture of Hong Kong through a themed exhibition on the top-floor of an untouched original multi-family tenement, with original floor tiles, and artefacts collected from residents in the district.

Recently, the Blue House has been given the Award of Excellence, the highest level, by UNESCO at its Asia-Pacific Awards for Cultural Heritage Conservation. The building has come to symbolise a relatively rare urban conservation success story in Hong Kong.

• Guided tour of the 3 interconnected buildings making up the historical complex: the Blue House, the Yellow House and the Orange house;

• Exclusive visit to the 3/F Heritage Preservation Unit of the Bluehouse, with fine 1920s wall and tiles, where original objects from former Blue House occupants are exhibited;

• Complimentary wines and drinks served at Nicholas's workshop where he designs and produces Chinese traditional papercutting art; and

To reserve places, please email to This email address is being protected from spambots. You need JavaScript enabled to view it. and state how many places you would like. You'll then receive booking instructions and a booking form. Anyone wishing to join the Field Trip who is not yet a member is encouraged to join the RGS-HK. Detailed joining instructions are going to be sent before the event.

Nicholas Tsao is a practicing architect working for Herzog & de Meuron Hong Kong. He is a graduate in architecture of the University of Cambridge and the Chinese University of Hong Kong. Nicholas was awarded the DFA Hong Kong Young Design Talent Awards in 2015 and 2016. He currently resides in the historic Blue House, where he can contribute to community events and share his passion for architecture and traditional crafts.

This event is going to be held within our understanding of any social distancing rules of the Government then prevailing.