David Saddington
Thursday, 15 Dec 2022
Google Calendar Outlook Calendar
7.00 pm to 8.00 pm
Webtalk
In this talk, David Saddington, the Head of the COP26 Nature Campaign, reflects on the last year of climate COPs. As 2022 drew to a close, so did the United Kingdom's Presidency of the international climate COP process, having now handed over leadership to Egypt. 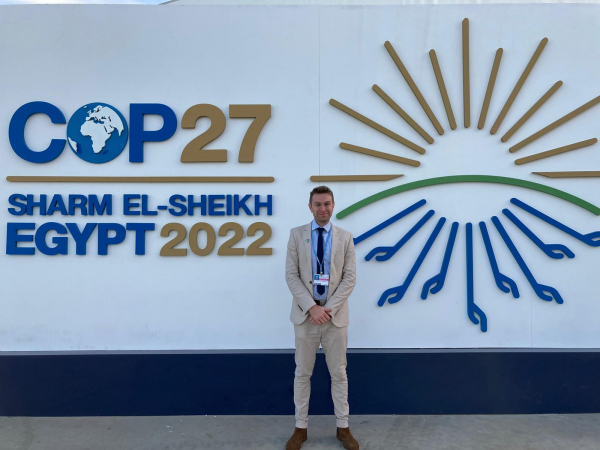 One of the major announcements from the UK's leadership was 146 world leaders pledging to halt and reverse deforestation by the end of the decade. Having led the 'Nature Campaign' and priorities for the British Prime Minister’s Office, David reflects on what was required to secure an agreement like this. He discusses, even more importantly, how to deliver them now that the UK is no longer in the driving seat.

David also offers broader reflections and discussions on running a climate COP and what is the best chance of averting climate catastrophe, with temperatures still rising, the world reshaped and in some areas crops failing, as the world comes to terms with tackling climate change in the age of the permacrisis.

David Saddington was the Head of the COP26 Nature Campaign and is now Head of Sustainable Supply Chains at the UK Department for Business, Energy & Industrial Strategy (BEIS). He has been a long-standing environmental activist since he was 13. A seasoned campaigner, communicator and policy advisor, he has advised governments around the world on international policy, led sustainability strategies for multi-national businesses and fronted a pioneering climate media campaign that reached over 3 million people including giving a TEDx talk at London's O2 arena.

He read geography at Durham University, from which he also holds a MSc. Since then, David has worked to stimulate climate action through providing features for media outlets like the BBC, by writing and by organising innovative large-scale public awareness. He led pioneering education reforms to get climate change on British school curricula. He is a board member of Nile Rodgers' “We Are Family Foundation” which supports game-changing youth leaders and is a Goalkeeper on the “Sustainable Development Goals” for the Bill & Melinda Gates Foundation.