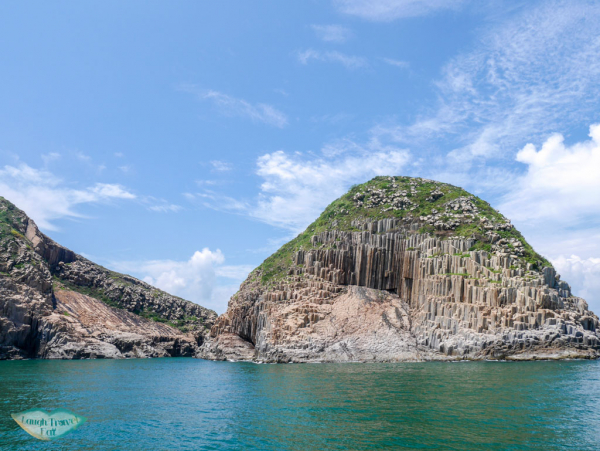 The trip proceeds to Tung A, via several other islands in the Hong Kong Geopark, to view the spectacular cliff scenery, including spectacular hexagonal columns.

The boat then stops for a fabulous seafood lunch at the famous Yau Ley seafood restaurant on High Island.

This is followed by the opportunity to hike through fabulous scenery to the magnificent Mok Min sea cave, which Members are able to enter.

Following the hike, our boat sails back to Central, viewing more of the rocks of the islands of the Geopark, which erupted about 140 million years ago, a time when dinosaurs roamed the world. It is estimated that approximately 70 cubic km of rubble erupted during this single event, five times more than the famous Krakatau eruption of 1883, which dispersed haze all over the world.

Cost: HK$1,180 for Members and $1,280 for Members’ guests including a fresh seafood lunch at Yau Ley Restaurant.

To reserve places, please email This email address is being protected from spambots. You need JavaScript enabled to view it. and state how many places you would like. You'll then receive booking instructions and a booking form. Anyone wishing to join the Field Trip who is not yet a member is encouraged to join the RGS-HK. Detailed joining instructions will follow shortly before the event.

Professor Jed Kaplan studied Geography and Earth Sciences at Dartmouth College, USA, and received his PhD in Plant Ecology from Lund University, Sweden. He subsequently held several postdoctoral fellowships. Later, he held Professorships at the Universities of Geneva and Lausanne, Switzerland, supported by the European Research Council. Prof Kaplan was a Senior Research Fellow in the Environmental Change Institute, University of Oxford, and is currently an Associate Professor in the Department of Earth Sciences, University of Hong Kong. He has published more than 100 articles in major international journals including Science and Nature and is recognised as an expert in interdisciplinary global environmental history. He is currently editor-in-chief of the journal Global and Planetary Change.

Professor Peter Clift read Earth Sciences at Worcester College, Oxford, followed by taking a doctorate in Geology & Geophysics from the University of Edinburgh. Following a career in the exploration geology industry, he held academic posts at several universities in the United States. From 2004 to 2012, Professor Clift was Professor of Geology at the University of Aberdeen. He is now a Professor of Petroleum Geology at Louisiana State University and Visiting Research Professor at the University of Hong Kong. While widely recognised for his work on Holocene climate change, for which he is widely published, he is perhaps best known for relating his geomorphologic work to human civilisations. He speaks widely at conferences worldwide, is a visiting lecturer at several universities and advises academic organisations worldwide. He is the author of countless papers and books, and has been awarded a prestigious Doctor of Science by the University of Oxford.