Michael Wood & Nicholas Kitto
Saturday, 19 Nov 2022
Google Calendar Outlook Calendar
The Hong Kong Club, 1/F, 1 Jackson Road, Central
Five-course Buffet Dinner with unlimited wines and other drinks throughout the evening
Please note that no blue denim, T-shirts or sportswear are permitted at the HK Club. For details, please go to www.thehongkongclub.hk/public/dress-code-policies.html
The Royal Geographical Society is honoured to welcome again world-famous British historian and broadcaster Michael Wood. With more than 60 of his television documentaries showing worldwide, and 20 books in print, we are delighted that Mr Wood is presenting a talk on his recent masterpiece, the celebrated book and television series The Story of China. 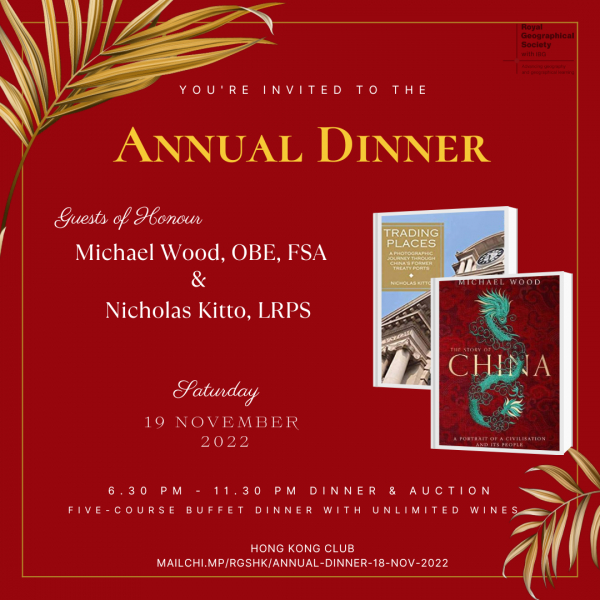 Michael argues that in order to comprehend the significance of China today, we must begin with its history. The Story of China takes a fresh look at the Middle Kingdom in the light of the recent massive changes inside the country. Michael looks at exciting new archaeological discoveries, the early dynasties, the origins of the Chinese state and the roots of Chinese culture in the age of Confucius. He also describes particular periods and themes that are now being revaluated by historians, such as the renaissance of the Song with its brilliant scientific discoveries.

Michael paints a vibrant picture of the Qing Empire in the 18th century, just before the European impact, a time when China’s rich and diverse culture was at its height. Then, he explores the encounter with the West, the Opium Wars, the clashes with foreign powers, the treaty ports and the rich debates in the late 19th and early 20th centuries that pushed China along the path to modernity.

We also welcome well-known Hong Kong photographer Nicholas Kitto, to talk about one of the most fascinating periods of China’s history, the Treat Ports era. China’s treaty port era extended approximately from 1849 to 1943, during which time foreigners had a significant presence in China, with Treaty Ports stretching along almost the whole of the coastline of China. Nicholas shows photographs of some of the thousands of beautiful surviving buildings from this period, which are in a plethora of Western architectural styles. A significant number of the buildings are of unique interest and are closely intertwined with China’s history in the 19th and 20th Centuries. He also talks of his own family’s association with China over two centuries, including during the Treaty Port era.

Individuals and smaller groups are very welcome to join. You are also welcome to book full tables for 12 people.

The cost includes a five-course buffet dinner including welcome drinks and unlimited drinks throughout the evening.

- Discounted non-member tickets are $1,180 each, including one year’s RGS-HK membership worth HK$400 when payment is made by recurring credit card

In the event of over-subscription, priority is to be given to Members.

Michael Wood was educated at Manchester Grammar School and at Oriel College, Oxford. He is perhaps the world's most popular history broadcaster, with some 60 published documentaries. In the 1970s, Mr Wood went to work for the BBC in Manchester first as a reporter, then as a producer on current affairs programmes, before returning to his love of history with his 1981 series In Search of the Dark Ages. Mr Wood's ability to present history in striking and memorable ways has drawn a diverse and worldwide audience, including In Search of the Trojan War, which played worldwide, and his documentary The Story of India and many others. Michael Wood travelled the length and breadth of China for The Story of China. Michael Wood is joining the event live by Zoom from London.

Hong Kong-based photographer Nicholas Kitto specialises in historical buildings and landscapes, working primarily in China. Originally from the Isle of Man, he has lived and worked in many countries in Africa and the Middle East. Since 1983, he has been resident in Hong Kong. He is the author of four books, including his seminal Trading Places: A Photographic Journey Through China’s Former Treaty Ports. He is a Licentiate of the Royal Photographic Society and a founding board member of The Photographic Heritage Foundation of Hong Kong. Nicholas Kitto is joining the event in person at the Hong Kong Club.

This event is going to be held within RGS-HK's understanding of the social distancing rules of the Government then prevailing. All patrons must meet the Government’s Vaccine Pass regulations which include scanning the LeaveHomeSafe app and vaccination record upon arrival at the Club.