Philip Cracknell & David Bellis
Saturday, 22 Oct 2022
Google Calendar Outlook Calendar
18:30
Hong Kong Club
Five-course Buffet Dinner with unlimited wines and other drinks throughout the evening
Please note that no blue denim, T-shirts or sportswear are permitted at the HK Club. For details, please go to www.thehongkongclub.hk/public/dress-code-policies.html
The Royal Geographical Society - Hong Kong invites you and your guests to join the RGS-HK Gala Dinner 2022. We are pleased to welcome distinguished historians Philip Cracknell and David Bellis as our speakers. 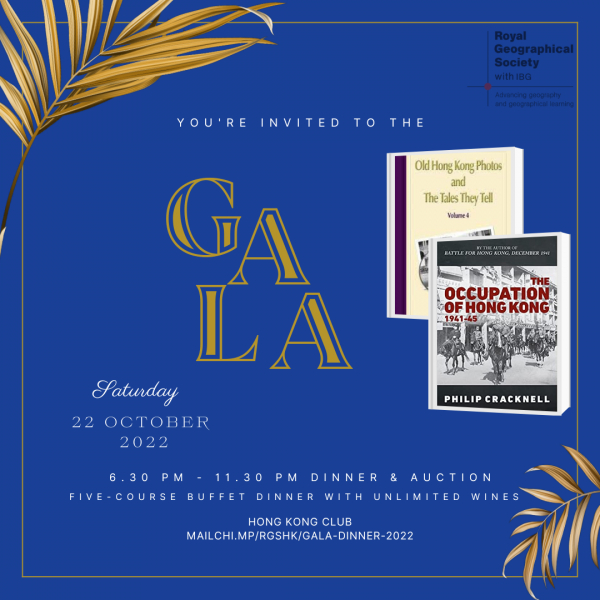 In his talk, Philip Cracknell tells what went wrong in the Battle for Hong Kong in 1941. He also discusses why the defence was so ill-prepared and dismisses the aftermath of the Japanese invasion which led to Japanese occupation until 1945.

On Monday, 8 December 1941, Japanese aircraft attacked Kai Tak destroying four out of five of the obsolete aircraft that made up the Royal Air Force’s minor presence in Hong Kong. At about the same time, the Japanese 38th Infantry Division crossed the frontier, and closed in on the Gin Drinkers Line. The Shing Mun Redoubt was captured on the night of 9/10 December, resulting in a withdrawal of the Hong Kong troops to new and unprepared positions along Golden Hill Ridge.

Hong Kong Island came under siege and the Japanese landed during the night of 18 December on the north-east shore of the Island. Wong Nai Chung Gap was captured, despite a valiant defence by Canadian troops. A week later, on Christmas Day, the Crown Colony surrendered, in a tragic history eloquently described by Philip. He goes on to describe the harsh nearly four-year occupation of the Japanese, including the internment of foreigners and the treatment of Hongkongers.

As a prelude, David Bellis presents a selection of photographs from his famous collection, showing the audience a Hong Kong that has long since disappeared, during the period before, during and after the war. He illustrates the photos with fascinating stories of Hong Kong around the wartime era.

Individuals and smaller groups are very welcome to join. You are also welcome to book full tables for 8 people.

The cost includes a five-course buffet dinner including welcome drinks and unlimited drinks throughout the evening.

- Discounted non-member tickets are $1,380 each, including one year’s RGS-HK membership worth HK$400 when payment is made by recurring credit card In the event of over-subscription, priority is to be given to Members.

Philip Cracknell arrived in Hong Kong in 1985 and worked as a banker until 2013. After retiring from the industry in 2013, he took up his interest in researching and writing about the Battle for Hong Kong. His research was done in Hong Kong and London. He is the author of the blog Battleforhongkong.blogspot.hk which has 322,000 page views. He has participated in an RTHK programme on the battle, podcasts and has appeared in a Channel 4 documentary. His first book "Battle for Hong Kong December 1941" was published by Amberley in July 2019. The second edition in paperback was published in July 2021. He recently published "The Occupation of Hong Kong 1941-45", which focuses on the civilian experience of the battle, occupation and internment. He also arranges private guided battlefield walks.

David Bellis runs the popular local history website, Gwulo.com. Most of the photos were taken around 1900-1930, though there are views right up to the 1960s. It hosts over 34,000 pages about old Hong Kong, including over 20,000 photos. He also gives regular talks, using his photo collection to introduce Hong Kong's history.

This event is going to be held within RGS-HK's understanding of the social distancing rules of the Government then prevailing. All patrons must meet the Government’s Vaccine Pass regulations which include scanning the LeaveHomeSafe app and vaccination record upon arrival at the Club.