A Journey along the Yangtze – China’s “Long River”

Bruce Connolly
Wednesday, 14 Sep 2022
Google Calendar Outlook Calendar
7.00 pm to 8.00 pm
Webtalk
The event is free of charge for members. For guests or non-members, the registration fee is $50. Please clickhttps://rgshk.org.hk/payment-for-bruce-connolly-s-webtalk-on-wed-14-sep-2022. The link for this webtalk is going to be sent at 12.30 pm on Wednesday, 14 Sep.
We are delighted to welcome again Bruce Connolly, one of China’s most distinguished travellers and photographers. There are many ways of appreciating a landscape – for a country as vast as China, rail travel has historically been most rewarding. However, as Bruce discovered in 1994, China then also offered some incredible river journeys. He headed southwest from Beijing by train and bus to Lushan in Sichuan. Two days downriver, by local boat, Bruce arrived at Chongqing, a city whose vibrancy was then closely linked to the Yangtze. 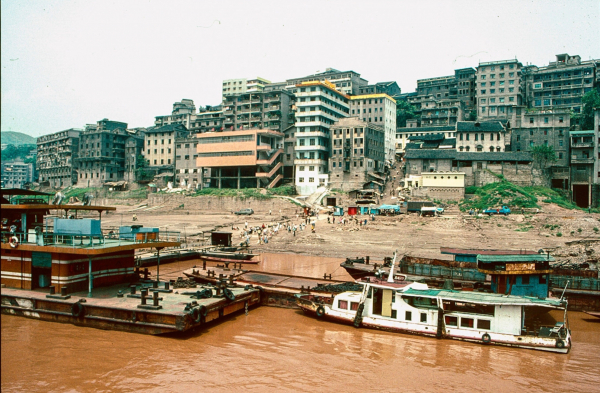 The Yangtze, China’s ‘Long River’ (Changjiang) flows from the Qinghai-Tibet Plateau towards the East China Sea near Shanghai. To follow the river, for Bruce, was then essentially a journey across the ‘Middle Kingdom’. Beyond the Chongqing stretch were the scenically spectacular Three Gorges, which he visited before today’s massive dam was constructed. Bruce tells of how he visited and photographed numerous towns and landscapes, many now underwater.

Before today’s expressway network and nationwide high-speed trains, water transportation was vitally important for both freight and people, especially from Chongqing downstream. Recently, returning to Chongqing, Bruce discovered a modern, indeed futuristic, city with advanced public transport systems and contemporary architecture, while still retaining its close relationship with the Yangtze.

Bruce Connolly is from the United Kingdom and studied Geography at the University of Glasgow. Passionate about his subject, he taught geography for many years. Bruce was also an avid traveller and adventurer, embarking on major transcontinental railway journeys and mountain explorations in the UK, Europe, North Africa and more. His stories he recounted regularly on BBC Radio Scotland and via lecture circuits for the Royal Scottish Geographical Society.

In 1987, he travelled overland by rail from Britain to Hong Kong. China gripped his fascination, a country he knew so little known about. An ambition evolved to travel its length and breadth, by train, boat, bus and on foot, with his camera, to photo-document the country before its inevitable transformation. Today he lives in Beijing, where for 12 years he has had a daily radio feature, ‘Bruce in Beijing’ and has written countless articles and videos exploring Beijing and many parts of China. His photography, recounting a personal view of the country and its people over 34 years, has been published widely both on-line, in print and exhibitions. He appeared on ‘Scots in China’, which was shown on BBC television and worldwide.