John and Bob Tsang
Thursday, 18 Aug 2022
Google Calendar Outlook Calendar
7.00 pm to 8.00 pm
Webtalk
The event is free of charge for members. For guests or non-members, the registration fee is $50. Please click https://rgshk.org.hk/payment-for-john-bob-tsang-s-webtalk-on-thu-18-aug. The link for this webtalk is going to be sent at 12.30 pm on Thursday, 18 August
In this talk, John and Bob Tsang from Hong Kong tell the thrilling story of how they became a “Father and Son” team to climb Mt Everest. John had climbed Mt Everest three times previously, but on the climb, Bob became the youngest Hongkonger to scale the mountain. John and Bob have also climbed Denali (Mt McKinley) together. 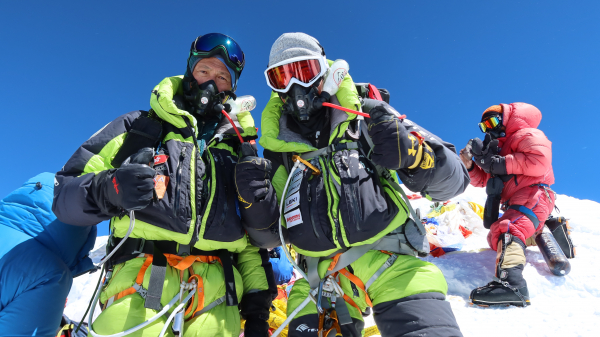 John Tsang gives an introduction to his experience of travelling the world and completing the Seven Summits, the highest mountains in each continent. He also discusses his four successful ascents of Mt Everest, including the life lessons learned and important people he met along the way.

Bob Tsang covers some of the technical aspects of climbing Mts Everest and Denali, including equipment, technicality of the climb and life-threatening situations. He also discusses climate change and how it has impacted each peak, including the overall mountaineering practices.

John, Tsang Chi-Sing is from Hong Kong and started pursuing mountaineering in 1991. For the past 30 years, John has organised more than 50 overseas expeditions in all 7 continents for Hong Kong people. In all of 2009, 2013, 2018 and 2022, he successfully summited Mt Everest, among seven successful ascents of 8,000m peaks. He also completed the Seven Summits in 2012. In 2015, John set up an overseas mountaineering expedition travel agency called Alpine Adventure Travel, taking people to climb mountains all over the world. In 2016, he won the 11th Piolets d’Or Asia Awards (Best Climber Award) and was Founder & Team Leader of 2019 Mt Everest Team Hong Kong.

Bob, Tsang Long-Kit started hiking abroad with his father from the age of six, and since then has been continuing to pursue the thrill of mountaineering. He began his dream of completing the Seven Summits when he was 12, beginning with Mt Kilimanjaro. Bob is currently taking a gap year and has climbed his 5th and 6th summits, Mt Everest in 6 days and Denali in 11 days respectively. He aims to climb the final peak, Mt Vinson, in the coming years, as he now continues to his studies to pursue a degree in Film and Television. He was the youngest Hong Kong person to climb Mt Fuji, to complete six of the Seven Summits and to summit Mt Everest.