Dr Jonathan Clements
Tuesday, 17 May 2022
Google Calendar Outlook Calendar
7.00 pm to 8.00 pm
Webtalk
The event is free of charge for members. For guests or non-members, the registration fee is $50. Please click https://rgshk.org.hk/payment-for-jonathan-clements-s-webtalk-on-tue-17-may. The link for this webtalk is going to be sent at 12.30 pm on Tuesday, 17 May.
In this talk, Dr Jonathan Clements examines the story and long-term impact of Britain’s first formal attempt to make a treaty with Imperial China. In 1793, King George III sent an Embassy to the court of China’s Qianlong Emperor. He hoped to establish diplomatic relations, to explore Chinese markets for British goods and to negotiate favourable trade terms. 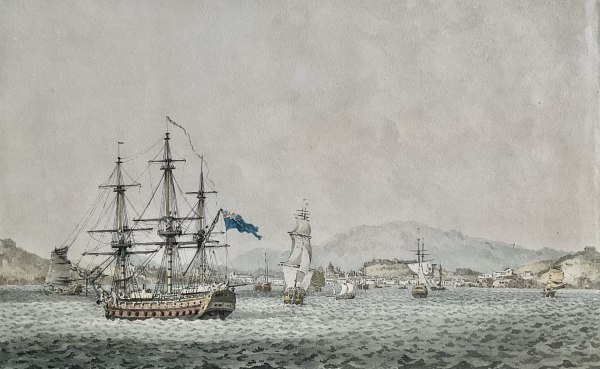 The envoy, the 1st Earl Macartney, former Governor of Madras, arrived escorted by 64-gun Man-of-War, HMS Lion. He is fascinated by what he sees, from being impressed by the sight of the Summer Palace to being appalled at the lot of most Chinese. He arrived as a proud emissary of a powerful and rising nation, but was surprised when confronted with Chinese views of the outside world. Through his eyes, one can see China as it was, a proud empire, but already falling apart from within, but soon to face what is described today by some as a grim century of humiliation.

Jonathan explains the tense negotiations over protocol and the kowtow, the brinksmanship of the British mission, and the reactions of their Chinese counterparts. He also digs into the real issues behind the scenes: the vast fortunes to be made in the tea trade, and the growing issue of the Indian opium smuggling to pay for it, which Lord Macartney opposed. This was because China, to its loss for the next century, refused to buy modern Western goods or technologies from Britain and other western countries. Britain’s did not achieve its scramble for access to China, but neither did China benefit from an ideal opportunity to reach an accommodation with the West.

The Embassy was therefore not successful in its aim to open trade with China, although Britain did gain a first-hand assessment of the strengths and weaknesses of the Chinese empire. Jonathan therefore also focusses on the unexpected achievements of the journey, in the rich and abundant observations, diaries and letters written by Lord Macartney’s entourage on their long journey home along the Grand Canal. These materials have formed the basis of multiple publications in both China and the West, as modern scholars consider the Macartney Mission’s place in history, and the lessons we might learn from it.


Dr Jonathan Clements is a British author and television presenter. He read for his Master's degree at the University of Stirling and for his PhD at the University of Wales. He has presented three seasons of Route Awakening, a TV series for National Geographic about icons of Chinese history and culture. He is also a prolific author on East Asian themes, most recently of The Emperor’s Feast: A History of China in Twelve Meals and Japan at War in the Pacific. Several of his books have been published in both English and Chinese, including his biographies of Empress Wu, Qin Shihuang and Wellington Koo, as well as his history of the Silk Road. As the author of A Brief History of the Martial Arts, he has recorded several commentary tracks for Arrow Films on the historical contexts of Hong Kong cinema, including Heroes of the East and Martial Arts of Shaolin. He is currently developing a TV series about the Macartney Mission with Crane Productions (Macau).