Les Bird
Thursday, 24 Feb 2022
Google Calendar Outlook Calendar
7.00 pm to 8.00 pm
Webtalk
The event is free of charge for members. For guests or non members, the registration fee is $50. Please click https://www.rgshk.org.hk/payment-for-les-bird-s-webtalk-on-thu-24-feb. This link for this webtalk is going to be sent at 12.30 pm on Thursday, 24 February.

Les Bird was a HK Marine Police Officer when the Vietnamese boatpeople started arriving in HK waters in 1979. He tells of how his patrol boats sailed out to meet the boatpeople’s flimsy boats, many of which were overloaded and sinking. In 1979 alone, more than 68,700 people arrived at Hong Kong’s sea boundary. By 1989, all 13 Vietnamese boat people camps in Hong Kong were declared full. He also tells how, 40 years later, he has been in contact with some of the former refugees he rescued. 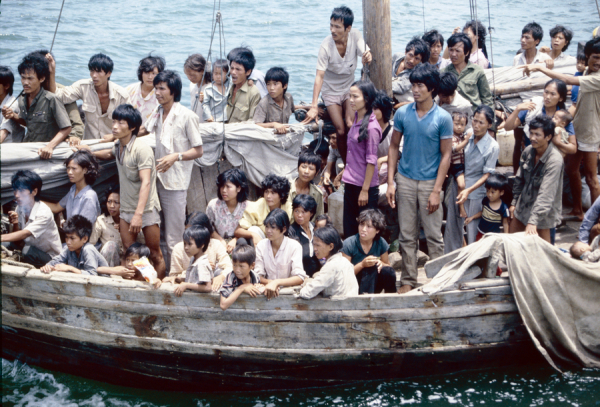 He describes the harrowing sea journey to Hong Kong made by tens of thousands of refugees in the years that followed the end of the Vietnam War.  Initially, Les and his colleagues were directed to put all new arrivals on the remote island of Tai Ah Chau which, at the outset, was devoid of facilities.  Within a week, they had more than 3,000 people to look after.  As he patrolled the southern maritime boundary of Hong Kong, he photographed their makeshift boats and later the people-smuggling vessels coming in – including the Sen On, a freighter ship that was abandoned by its crew and ran aground on Lantau Island.

With his previously unpublished collection of personal photographs,  Les tells the stories of these boatpeople – the young children, the father who just bought a boat to embark on a 1,000-mile journey and the disillusioned North Vietnamese battle-hardened veterans – all searching for a new life.

Les Bird is from Staffordshire, United Kingdom. After leaving school, he travelled extensively through Africa and Australia before joining the Royal Hong Kong Police in 1976.  He worked in the Marine Police for 21 years until June 1997.  His work was diverse – in the late 1970s he was a rural inspector of West Lantau, in the early 1980s he returned to sea duties, overseeing the influx of tens of thousands of Vietnamese refugees in the years that followed.  During his service, Les commanded three of the five Marine Divisions and also headed the Special Boat Unit, the Marine Fast Pursuit Unit combating cross-border smuggling of people, arms, drugs and luxury cars.

After leaving the police in 1997, Les moved into the private sector, working in the security industry across Asia.  He is an endurance athlete, and has taken part in Ironman events and long-distance triathlons worldwide.  He represented Great Britain at the 2009 Ironman World Championship.  In 2011, he swam the English Channel and in 2012 summited Mont Blanc.  He is the author of two books: “A Small Band of Men" and “Along the Southern Boundary: A Marine Police Officer's Frontline Account of the Vietnamese Boatpeople and their Arrival in Hong Kong”, both published by Blacksmith Books.

Les's two books are available to purchase by clicking here.