The Maritime Silk Road seen through the Codice Casanatense

Peter Gordon and Juan José Morales
Monday, 29 Nov 2021
Google Calendar Outlook Calendar
Drinks Reception at 6.30pm; Talk at 7.30pm
Tanner De Witt, 17/F., Lippo Centre Tower 1, 89 Queensway, Admiralty
Please note that Members and guests need to be fully vaccinated in order to attend this talk. Participants need to scan "Leave Home Safe".
Among the thousands of centuries-old books in Rome's famed Biblioteca Casanatense, is an album of 76 striking 16th Century watercolours. The album, the Codice Casanatense, was painted by an Indian painter around 1540 in Goa for an unknown Portuguese patron. It contains fascinating and unique illustrations of daily scenes, professions and religious ceremonies, as well as the peoples of what is now known as the Maritime Silk Road. 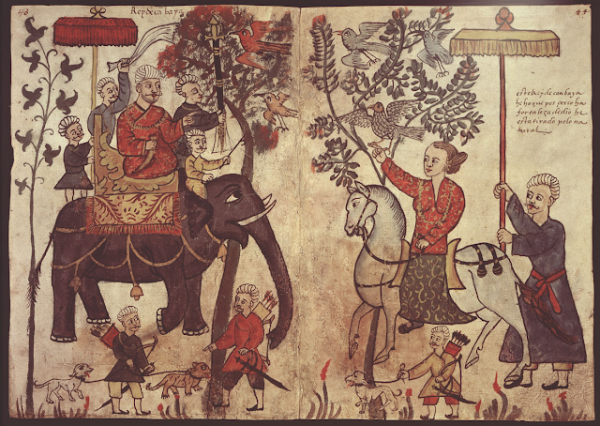 Peter Gordon and Juan Jose Morales have made a lengthy and detailed study of this remarkable and unique document.  Hidden within are hints to a personal story: a marriage between a former Portuguese soldier and a local woman, a man who rose to become an affluent merchant with connections from Africa to China.

Their talk includes dozens of these intriguing illustrations and introduces the Codex.  It also opens the door on the fascinating world of Asia in the 16th century, when Europe and Asia were first in extended contact.

Peter Gordon is from the USA and is the editor and founder of the "Asian Review of Books" and the publisher at Chameleon Press.  He has been active in Hong Kong book circles for more than 20 years and writes regularly for the Hong Kong and regional press on policy and culture.  He was the driving force behind the Hong Kong International Literary Festival, the Man Asian Literary Prize and the Hong Kong-based online bookseller Paddyfield.com.  He has a degree in Applied Mathematics and Linguistics from Harvard University.  He has been awarded the "Knight of the Order of the Star of Italy".

Juan José  Morales is from Spain and is a lawyer and management consultant who writes for the magazine Compromiso Empresarial.  He is well-known as a writer and speaker on Asian and Iberian history, arts and culture, and is the former President of the Spanish Chamber of Hong Kong.  He has resided in Hong Kong for more than 25 years.  He has a Master's Degree in International and Public Affairs from the University of Hong Kong, where he now lectures on Chinese Poetry, and has also studied International Relations at Peking University.  His writing on history, arts and culture has appeared in the South China Morning Post, Caixin, China Daily, The Diplomat and other publications.  He has served on the board of several cultural societies, and is now Honorary Secretary of the Board of Governors of Musica Viva.

The Royal Geographical Society - Hong Kong wishes to express its thanks to Tanner De Witt as the Drinks and Venue Sponsor of this talk.

The opinions expressed at this event are those of the speakers and do not necessarily reflect those of the Royal Geographical Society - Hong Kong.