Dr Anton Wolfaardt
Tuesday, 17 Aug 2021
Google Calendar Outlook Calendar
7.00pm-8.00pm
Webtalk
The event is free of charge for members. For guests or non members, the registration fee is $50. Please click https://www.rgshk.org.hk/payment-for-dr-anton-wolfaardt-s-webtalk-on-tue-17-aug. The webinar link is going to be sent at 12.30 pm on Tuesday, 17 August.
In this talk, Dr Anton Wolfaardt provides an overview of Marion Island, South Africa, and the ambitious project to eradicate mice from the island and reclaim it for its globally important seabirds and other wildlife. Marion Island is the larger of the two sub-Antarctic Prince Edward Islands off South Africa. The islands are globally important breeding sites for seabirds and other wildlife and were afforded Special Nature Reserve status in 1995. 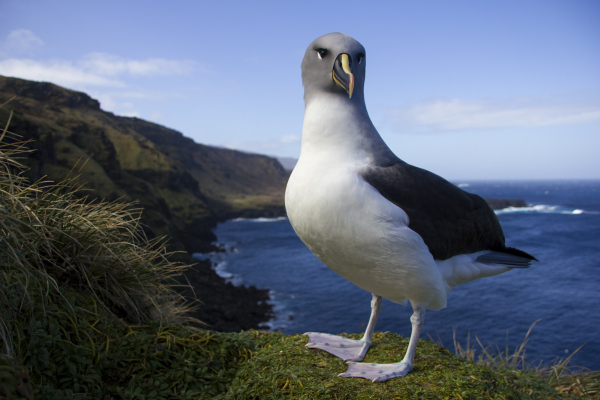 The islands are home to almost half the world's Wandering Albatrosses, millions of other seabirds and other species of wildlife, some of which are found nowhere else in the world.  Marion Island is facing a grave threat because house mice, inadvertently introduced by sealers in the early 19th century, are having a devastating impact on the ecology of the island.

A warmer and drier climate over the last 30 years has contributed to an increase in the densities of mice on the island each summer, causing a shortage of food for the mice in the winter months.  This shortage of food has driven mice to find alternative food sources and the mice found many of the nestling or fledgling seabirds had no defence against their attacks, and were literally “sitting ducks”.  Left unchecked on Marion Island, the mice are likely to cause the local extinction of 18 of the 27 seabird species that breed on the island.

Fortunately, there is a solution.  Advances in the technology and techniques used to eradicate rodents from large islands have led to increasingly ambitious and successful restoration campaigns.  A study conducted by an international expert concluded that it is feasible to eradicate mice from Marion Island and the South African Government and Bird Life South Africa are collaborating to implement an eradication operation to restore Marion Island and rescue its seabird populations.

Dr Anton Wolfaardt holds a BSc from the University of Cape Town, South Africa, majoring in Zoology and Environmental & Geographical Science, another BSc in Conservation Biology from the University of Stellenbosch, and received his PhD from the University of Cape Town for his work on the breeding ecology of African Penguins.  He has worked for more than 25 years in the field of seabird and marine conservation, starting on Marion Island in 1994, where he spent a year working as a seabird field researcher.  Anton subsequently spent five years on Dassen Island, off the west coast of South Africa.  He then worked as a Regional Ecologist for CapeNature, the conservation authority for the Western Cape Province of South Africa.

In 2008, Anton headed to the Falkland Islands to take up the newly created position of ACAP (Agreement on the Conservation of Albatross and Petrels) Co-ordinator for the United Kingdom South Atlantic Overseas Territories, including the Falkland Islands, South Georgia, the South Sandwich Islands, Tristan da Cunha, Gough Island and the UK's sector of Antarctica.  Since returning to South Africa in 2013, Anton has worked as an environmental consultant focussing on seabird and marine issues was recently appointed to take up the position of the Mouse-Free Marion Project Manager to eradicate introduced house mice from Marion Island.