Exhibition Curator & Tour Leader: Edward Stokes
Thursday, 29 Apr 2021
Google Calendar Outlook Calendar
3.30 pm to 4.30 pm
Sino Plaza, Causeway Bay, Gloucester Road
The photos of this exhibition are linked by their period, the 1950s. They were taken by two photographers – Marjorie Doggett in Singapore and Lee Fook Chee in Hong Kong. The photographers had parallels and the two cities had similarities, yet for both photographers and cities, there were also great contrasts. These similarities and contrasts are shown through the exhibition’s 50 framed photographs and its narrative panels. 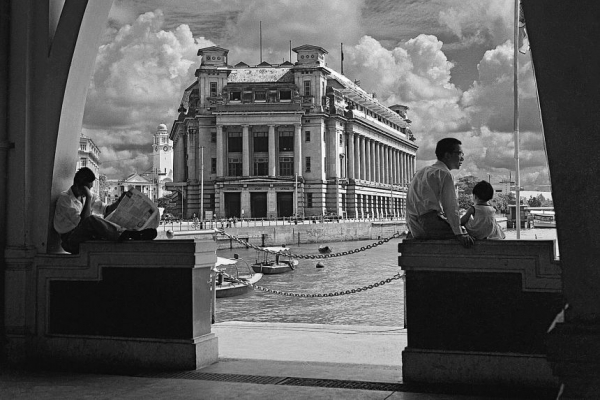 In Singapore, the grand 1930s Fullerton Building stood in the colonial precinct. Nearby was the Bank of China.  In Hong Kong, the Hong Kong and Shanghai Bank rose by the Bank of China.  Adjacent was the British Cricket Club.  By the Singapore River, traditional tongkangs unloaded cargoes in crates and sacks.  In Victoria Harbour, weather-beaten junks tacked across blue-green waters.

Marjorie Doggett and Lee Fook Chee created vivid records of Singapore and Hong Kong more than six decades ago.  The 1950s were to be a crucible decade for both cities. Singapore was moving steadily towards a locally inspired and led future.  Hong Kong was to witness an economic transformation.  In both, the urban setting soon would be massively changed and developed. The exhibition shows the cities “as they were” – before their massive modernisation.  Both Hong Kong and Singapore faced great, yet primarily different, economic challenges.  These challenges, overcome in different ways, were to create the springboards for their rapid evolution into two of Asia’s “tiger” economies.

Edward Stokes hails from Australia and was educated at Magdalen College, Oxford.  He came to Hong Kong in 1993 to work on projects on the natural landscape.  He is now a well-known photographer and writer.  He established the Hong Kong Conservation Photography Foundation in 1997 to raise environmental and conservation awareness in Hong Kong.  His first book was Hong Kong's Wild Places, a highly regarded, evocative portrayal of the evolution of the natural landscape, describing the interplay between 'man and land'.  His other books each explored a different part of the territory.

Edward is the Founder Director of The Photographic Heritage Foundation, a not-for-profit publisher that focuses on heritage and nature publications.  He is the author of Hong Kong As It Was, several books of historic photographs and also the photographer/author of books on the natural landscape and the history of Australia.  He has lectured worldwide, including to the RGS in London and Hong Kong, and has also appeared regularly in many other media.