David Fox-Pitt
Wednesday, 7 Apr 2021
Google Calendar Outlook Calendar
7.00 pm to 8.00 pm
Webtalk
The event is free of charge for members. For guests or non members, the registration fee is $50. Please click https://www.rgshk.org.hk/payment-for-david-fox-pitt-s-talk-on-wed-7-apr. This link for this webtalk is going to be sent at 12.30 pm on Wednesday, 7 April.
In this this talk, adventurer and motivational speaker David Fox-Pitt tells the extraordinary story of riding a Penny Farthing bicycle from Land’s End to John O’Groats, the extremities of the United Kingdom, in August 2019. A veteran of numerous exploits, from SAS selection, ultramarathons to climbing the Carstensz Pyramid, David takes the audience through an array of experiences on the journey, and illustrates his principles of “Positiverosity” within the context of the journey. 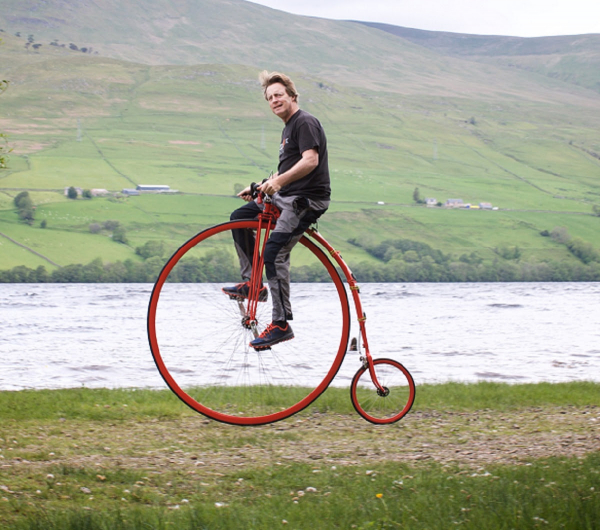 He tells the details of this particularly challenging 950-mile ordeal and the adversities it presented, testing him to the limit.  He shows how he overcame the massive challenge on such a slow and dangerous bicycle, talking of the fear of failure, fitness and the learning a new skill.

He describes the planning of the trip, breaking the distance down into 11 days and into hourly segments.  He also factored in water stops and sustenance.  There was also accommodation to be sorted, risk mitigation, the ever-pressing risk of serious injury and the dilemma of a safe route versus more hills.  He describes how he felt at Land’s End and compares it with his feelings one hour into the daunting challenge in ghastly weather.

In this case Mary’s Meals was the beneficiary charity and he pedalled on in the knowledge that every £15 would feed a child for one year at a place of learning in Malawi giving them access to education.  The challenge raised over £25,000.

David Fox-Pitt was raised in Dorset, UK and now lives in the Scottish Highlands.  He spent his early career in hotel management and travelling.  He lived in Hong Kong from 1987 to 1995 and took part in The Maclehose Trail Walker Event.  He then began focusing on motivational speaking, charity and adventure challenges.  In 1996, he developed the Caledonian Challenge, a 24-hour hike along the West Highland Highway, which has raised £14 million for charities to date.  He also set up The Loch Ness Marathon in 1999, which is now the UK’s third largest marathon.  The same year, he founded the Adventure Challenge Company WildFox Events, which organises charitable events and has raised over £50 million.

Mr Fox-Pitt’s aim is to inspire people to become more resilient and resourceful and develop a healthy attitude towards fear and failure.  In 2017, he published his motivational book entitled Positiverosity: 7 Golden Principles, in which he gives encouragement and advice to his readers based on his own adventures and charity work.  In May 2021 he plans to cycle 175km in one day on his Penny Farthing, raising funds for transformational bursaries at Glenalmond College.