A Modern Viking's Adventure: One planet | One journey | Every country | No flights

Thor Pedersen
Tuesday, 17 Nov 2020
Google Calendar Outlook Calendar
7.00 pm to 8.00 pm
Webtalk
The event is free of charge for members. For guests or non members, the registration fee is $50. Please click into https://www.rgshk.org.hk/payment-for-thor-pedersen-s-talk-on-tue-17-nov. The webinar link is going to be sent to members, guests and non members at 12.30 pm on Tuesday, 17 November.
On 10 October 2013, Thor Pedersen set out on an ambitious journey to become the first person in history to reach every country in the world completely without flying. He had nearly accomplished his goal until he got stuck in Hong Kong on 28 January 2020 due to the pandemic. Already the record holder for the world’s greatest land traveller, he is only nine island nations away from having visited the whole world’s countries without flying, including every war zone in the world. 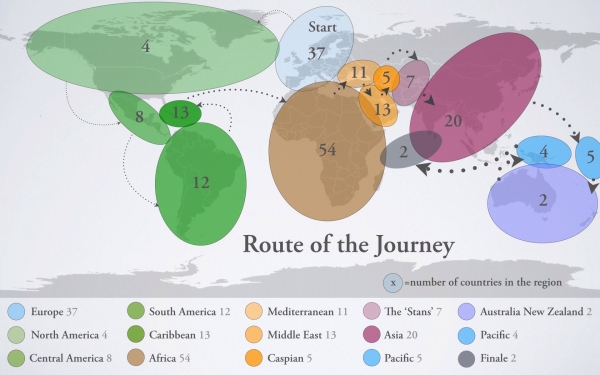 In the talk, Thor speaks about the unique adventures within the journey and the considerations relating to the planning of a multi-year global project.  The greatest challenges Thor has faced have always been those of bureaucracy, logistics and the need for extreme stamina.

Over the seven years, Thor has encountered grave danger in the form of drunken armed men as well as those of high seas, with giant waves crashing in over the ship from all sides.  He has slept on the street and dined in the homes of billionaires.  He has been to every country in the world which has armed conflict or civil war.

He once had to take an 11,919 km detour by land, revisiting seven countries, traversing Baluchistan in Pakistan escorted by armed guards, and all because he was denied a visa while in Ulaanbaatar, Mongolia.

Thor first took on Europe then crossed over to Greenland and North America, down to South American west coast and up through the eastern side ending up in the Caribbean.  Then he crossed back to Europe for a brief visit before going down Africa, travelling down the western side and up the eastern.  With Africa done he crossed back into Europe and tackled the Arabian Peninsula before venturing back into Russia, Caucasia and then towards Asia, taking Pakistan and India on the way.

As a goodwill ambassador of the Danish Red Cross, Thor has paid a visit to the movement in 189 countries already, and has raised awareness as well as funds for the noble humanitarian work which is carried out globally.

Torbjorn “Thor” Pedersen was born in Denmark and grew up in North America before returning to Denmark years later.  In Denmark, he finished his school and military service before finding his feet within shipping and logistics in the private sector. By 2009, he became an independent businessman and after years of working internationally as a logistics professional he embarked on his present world record-breaking multi-year journey.