Tiananmen 1989: The Man who Stopped the Tanks

Jeff Widener
Thursday, 5 Jun 2014
Google Calendar Outlook Calendar
Session 1: Drinks 5.30 pm; Lecture 6.30 pm; Session 2: Drinks 7.00 pm; Lecture 8.00pm
Ming Hua College, Glenealy, Central (this convenient location is situated opposite the Fringe Club)
Please note that we are requesting pre-booking; please reply to This email address is being protected from spambots. You need JavaScript enabled to view it. stating which session and the number of attendees who wish to book for the event

The Royal Geographical Society is pleased to welcome international photographer Jeff Widener to lecture on "Tiananmen 1989: The Man who stopped the Tanks". Twenty five years ago to the day of this lecture, a lone Chinese man stopped a column of Chinese tanks for nearly an hour, during the Chinese government's crackdown on the Tiananmen Square protests. The famous photograph taken by Mr Widener of this incident reached the front page of newspapers of over 100 countries and has become one of the most iconic photographs of the 20th Century. 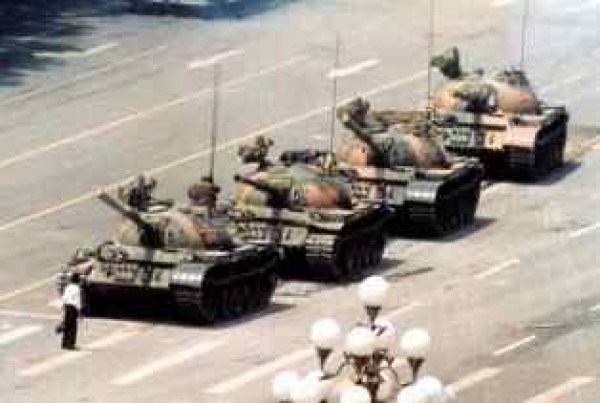 In this lecture, Mr Widener tells the story of how he covered the events of the Tiananmen incident for Associated Press and how he managed to take what has become known as the “Tank Man” photograph. He also discusses how he managed to get the photo out of China to the world. He then reflects on 30 years as an international photographer, with stories selected from his assignments in more than 100 countries around the world, from the Polish Solidarity movement to the Khmer Rouge fighting in Cambodia.

On an early morning during the June 1989 Tiananmen uprising, a man stood in the middle of a wide avenue, directly in the path of a column of approaching tanks. The tanks came to a stop, then attempted to drive around the man, who then climbed onto the lead tank, only to get off to stop the tanks again, leading to a stand-off of nearly an hour. Jeff Widener, then an Associated Press photographer, watched the whole episode and furtively positioned himself to take the photograph. He then had it furtively sent for transmission out of China and eventual front-page display in newspapers worldwide. Extraordinarily, he managed to document the whole student uprising, despite that fact that he himself had received severe injury, when a stray rock during the incident struck him on the face.

Jeff Widener hails from Southern California where he attended Los Angeles Pierce College and Moorpark College, studying photojournalism. Mr Widener’s career started as a newspaper photographer in California. At age 25, he moved to Brussels to be a staff photographer with United Press International. His first foreign assignment was the Solidarity riots in Poland. Since then, Mr Widener has covered major stories in more than 100 countries, including the Gulf War, Khmer Rouge fighting in Cambodia and the 1988 Summer Olympics in South Korea. Mr Widener also transmitted the first digital news images from the South Pole. Mr Widener’s work has received hundreds of awards and citations.