In the Footsteps of Thesiger: Crossing the Empty Quarter

The Royal Geographical Society is pleased to welcome again Adrian Hayes to speak to the Royal Geographical Society, on this occasion to lecture on "In the Footsteps of Thesiger: Crossing the Empty Quarter". This lecture was given to a capacity audience at the RGS London earlier this year, to sensational reviews. This follows Adrian Hayes’s well-received lecture to the RGSHK during 2011 on “To the Ends of the Earth”, when he spoke of his conquest of the Earth’s three extremes of altitude and latitude, the North Pole, South Pole and Mt Everest, together with his record-breaking vertical crossing of the Greenland ice cap. 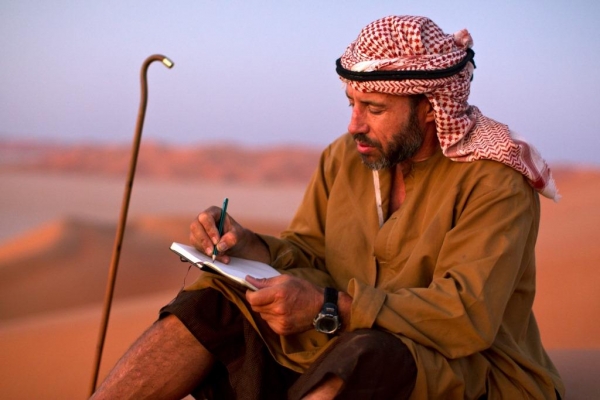 In this lecture, Mr Hayes tells of his 1,000 mile, two month crossing by camel and foot of the legendary “Empty Quarter” of the Arabian Desert. In his powerful story, accompanied by stunning images and film, Mr Hayes speaks of the then largely unheralded achievements of Thesiger during the 1940s and the reality of attempting the same journey 65 years later with an authentic Bedouin team. Mr Hayes is the first person to achieve this feat since Sir Wilfred and he recounts the glories, beauty and trials of this amazing expedition, already a best-selling book and film.

During the lecture, Mr Hayes presents his thoughts on Sir Wilfred Thesiger’s expedition and the realities of launching a modern-day expedition of the same route using traditional clothing and equipment. He also speaks of the dramatically changed existences of the Bedouin of the Arabian Peninsula during this period. As a former Gurkha officer and Arabic speaker, Mr Hayes was well equipped for the expedition, but found himself even more astonished, as he experienced the trials of the journey, by the achievements of Thesiger’s original expedition.

Mr Hayes also speaks of the beauty and brutality of the largest sand desert in the world. He also recounts how, while Sir Wilfred faced bandits, Mr Hayes faced bureaucracy. In such a sensitive area of the world, this meant even getting to the start line was an expedition in itself. This included trying to find a way of getting three explorers and hauling seven camels over a 3-metre high border fence with barbed wire on top that now surrounds the UAE.

In a lecture replete with fabulous photographs and film clips, Mr Hayes also tells numerous stories and anecdotes from the trip. This includes of his “non-love affair” with camels, one of which threw him off on “day one”, resulting in Mr Hayes being concussed and hospitalised with 13 stitches in his head. Mr Hayes, a sustainability campaigner, also discusses the greatest challenge he faced on the journey and probably the greatest challenge the Middle East faces for the future, the lack of water.

Adrian Hayes hails from the UK and is a polar explorer, adventurer, keynote speaker, corporate coach and sustainability ambassador. A former Hong Kong-based Gurkha Officer and Special Forces soldier in the British Army, Mr Hayes has a career of adventure and expeditions, having served, climbed, sailed, dived, sky-dived, kayaked, trekked and much more in ice caps, mountains, jungle and desert the world over. He was also for 6 years the Regional Sales Director for Airbus Middle East and West Asia. With 20 years’ experience in leadership, he now runs his own company delivering leadership and team coaching programmes worldwide. A keen follower of politics and international affairs, he is also an ambassador and speaker on economic, social and environmental sustainability. A resident of the UAE, Mr Hayes has worked in nine countries, visited over 100, and speaks three languages in addition to English.