Did Admiral Zheng He explore America before Christopher Columbus? 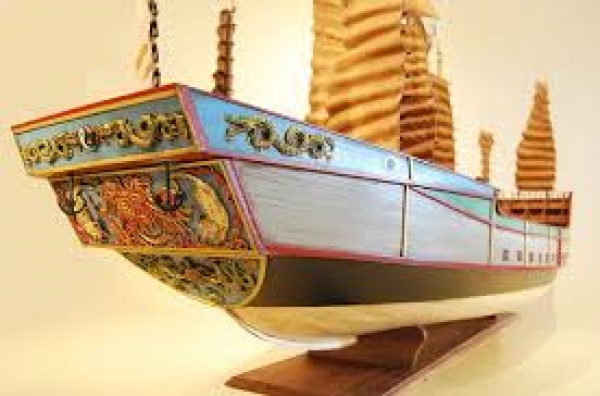 From 1405, in order to expand Dynasty’s reach, the early Ming Emperors ordered Zheng He to lead giant fleets across the seas seven times.  While these voyages marked the most famous episode of Chinese sailing, they were terminated soon after Zheng He’s last voyage due to a momentous change of policy by the Chinese government: to isolate itself from the rest of the world despite then being a major power.
While some records and artefacts relating to the voyages survive, much of them have been destroyed, making it difficult to reconstruct the history of these expeditions.  In 1597, nearly two hundred years afterwards, Chinese novelist Luo Maodeng, knowing the history of some of these voyages decided to write about them, recording a version of the facts in a historical novel “An Account of the Western World Voyage of the San Bao Eunuch”.

Dr Wang has analysed Luo’s novel, attempting to use relevant geographical, climatological and cultural information, and trying to decipher hints and extrapolate from Luo’s account.  She has also attempted to extract the trans-Atlantic navigational routes, timelines and other relevant evidence.  From these, she believes that Zheng He’s last expedition may have reached the ancient American Indian city, Cahokia, now in the US central Mississippi Valley, in 1433, before Christopher Columbus set foot for the first time in the Americas.

While these claims are not accepted by the mainstream academic and historical communities, Dr Wang argues that Ming Chinese sailors and ships at least reached beyond what was previously accepted in modern times, and provides a new possible view of the history of 15th-century Chinese maritime exploration.

Dr Sheng-Wei Wang is a Chinese American, based in Hong Kong.  She has a BS from Tsing Hua University and a PhD from the University of Southern California.  In her early career, she was a staff scientist at the Lawrence Berkeley National Laboratory in the United States.  In 2006, she became an independent scholar and freelance writer, and founded the China-U.S. Friendship Exchange.  A year later, she launched an English-Chinese bilingual website to promote US-China relations. She also writes for China Daily.

In 2013, she started research on Zheng He and has since completed two related books.  She has given presentations on her Zheng He research at international conferences, universities, Zheng He Societies, and at the Executive Global Network, the Clurr Club and the Straits Forum.  She is a founding member of the International Zheng He Society founded in Malacca.