Paul Niel & Esther Roling
Wednesday, 9 Oct 2019
Google Calendar Outlook Calendar
Drinks Reception 6.30 pm; Talk 7.30 pm
2/F, Chater House, 8 Connaught Road Central, Central
Pre-payment is required. Please scroll down.
We are delighted to welcome back Hong Kong explorers Paul Niel and Esther Roling, to introduce their film ‘The Loop”. This is the extraordinary story of the first expedition to travel around the complete coast of Hong Kong Island, despite a black rain storm and lightning, and countless physical challenges on the way. 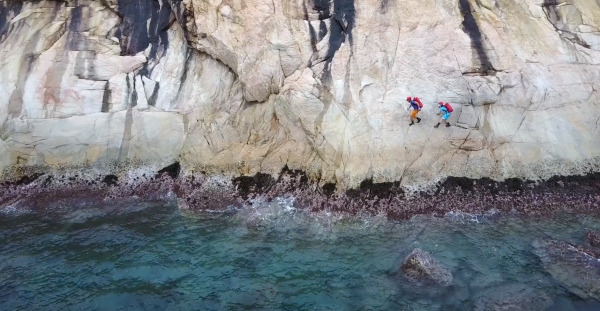 In 2017, Esther Roling and Paul Niel completed the first successful “coasteering” expedition of Hong Kong. In 6 days, they climbed, swam, scrambled and hiked the entire coastline, took 51 water samples and mapped 163 trash pollution spots, while always staying as close as possible to the waterline. Along this first continuous “circum-climb of the island, they encountered drama and at times appalling weather. They also mapped the island’s biodiversity, water quality and coastal pollution and took more than 50 water samples to make a first-of-its-kind pollution map.

The film tells how the two adventurers climbed the cliffs and shores of their home island and made many unexpected discoveries. It also shows the amazing challenges they faced, from extreme weather and strong currents, to barnacled cliffs, jellyfishes and mosquitos and also the mental exhaustion, offset by the joys of the wild cliffs, hidden beaches and the busy urban city.

Paul Niel is a Hong Kong based mountaineer and adventurer, who graduated from the University of Vienna. He has travelled the globe for expeditions and other adventures that have taken him to places as disparate as Kamchatka, Papua, the Arctic Circle and across the Atlantic Ocean in a sailing yacht. Over the last 10 years, he has successfully climbed the highest mountains on every continent, the celebrated “7 Summits”, became one of just a handful of climbers to climb two 8,000 m peaks on the same day, Mt Everest and Mt Lhotse, and achieved several first ascents in Antarctica.

He has travelled to more than 90 countries and sailed across the Atlantic. He works with Nepal based charity dZi and Indian charity Educate Girls and is a frequent keynote speaker and contributor to Action Asia magazine and the South China Morning Post. He is the Producer of award winning documentaries “Tibetan Dreams” and “Education Explorers”, two of the 15 expeditions he has organised.

Esther Roling hails from Holland. She is a social entrepreneur, investor, runner and globetrotter. In 2018, she co-founded the Adventure Clean-up Challenge and organised the world’s first multi-sports event with an environmental purpose. She has herself taken part in several ultra-trail marathons. She is a Board Member of the Explorers Club HK Chapter and has spoken frequently to the RGS Schools Outreach Programme.

Members of the RGS, their guests and others are most welcome to attend this event, which is HK$150 for RGS Members and HK$200 for their guests. This event is free of charge for our Student Members. Drinks are available to purchase.