In the Footsteps of Sir Wally Herbert: A Ski Traverse along the Antarctic Peninsula 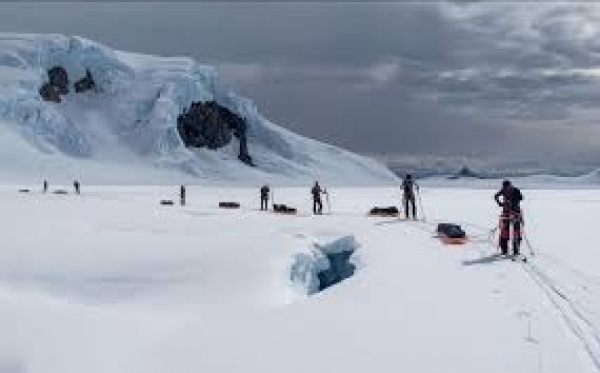 Better known for being the first person to walk to the North Pole exactly 50 years ago, Sir Wally Herbert’s polar career started as a surveyor in Antarctica with the British Antarctic Survey.  In 1957, Sir Wally and 3 companions made a traverse, using dogs, along the unsurveyed narrowest sections of the Antarctic Peninsula, a journey that had never been repeated.

The expedition was organised by Belgian surgeon Luc Delriviere and his Australian wife Bronwyn, and was led by Dr Wickens and Vincent Colliard, a leading French explorer.  They were joined by Caroline Cote, an adventure film maker and photographer, Ralf Dujmovits and Nancy Hansen, who are professional climbers, and Maria Witchell who is a resident in Hong Kong.  It took the team five days to reach Antarctica by yacht.  Over the next 26 days they travelled 216 km, dragging 2 sleds each to the top of the Antarctic Peninsula at an altitude of 2,000 m

The expedition also had to contend with a number of extreme challenges along the way, including extensive crevasse fields that blocked their progress, an unknown and very steep face to climb with all their sleds to reach the top of the Peninsula, intense storms and snow blindness.  On top of all that was the difficult decision as to whether or not to continue beyond the point of no possible rescue.  Their many dangers continued until the end of the expedition, when their yacht was unable to reach the proposed end point.

Dr Philip Wickens studied botany at Imperial College in London, United Kingdom.  After completing his PhD in Botany, he worked for two winters and three summers as a field guide for the British Antarctic Survey, when he worked on several major geology projects deep in the heart of Antarctica.  He has led numerous climbing and skiing expeditions to Antarctica, Tibet, India, Pakistan, Nepal, Peru, East Greenland, the Caucasus and Canada.  He was until recently Vice President of the Alpine Club.

His prolific explorations have led to him summiting almost 150 Antarctic summits, including 50 that were previously unclimbed.  When not conducting his own adventures, Dr Wickens is a freelance expedition leader, guide and lecturer, specialising in the history of exploration and the geology of the Polar Regions, and an accomplished photographer.