The form #79 does not exist or it is not published.

Edinburgh: Through the Eyes of Sir Arthur Conan Doyle 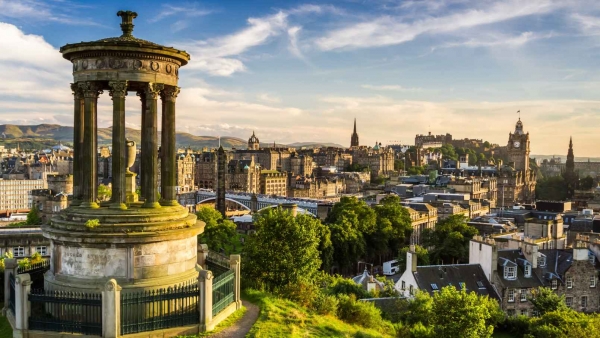 Mrs Treherne takes her audience through the life of Sir Arthur Conan Doyle, from his childhood in Edinburgh to his schooling and university life after which he began working as a doctor and finally a writer.  Sir Arthur Conan Doyle studied medicine at the University of Edinburgh medical school from 1976-1881 and the university is upholding his legacy today.  In fact, the character of Sherlock Holmes was based on Dr Joseph Bell, a graduate and lecturer at the university.  The university honours Sir Doyle today with a plaque in Teviot Place in the Medical School Building.

Mrs Treherne tells of Arthur's life in Edinburgh, and how the Centre which bears his name - of which she is founder -remembers him today and has deep-running connections with his many interests.  She contrasts how Arthur Conan Doyle experienced Edinburgh in his time and how the city now remembers it's most famous son.  While he is the most famous for authoring the Sherlock Holmes novels, Mrs Treherne also explores his attempt to run for a seat in parliament, his connections to art and music and his friendships with many famous contemporaries.

Finally, Mrs Treherne explores Sir Arthur Conan Doyle’s longstanding interest in psychic investigation and spiritualism.  He was the world’s foremost spokesman on spiritualism and Mrs Treherne tells on his enthusiasm for spiritual and psychic matters.

Ann Treherne was born in Edinburgh and became the CEO of a subsidiary of National Australia Bank.  She left finance in 1996, to concentrate on psychic development, eventually becoming a psychic investigator, like Sir Arthur Conan Doyle.  She is a longstanding member of The Scottish Society for Psychical Research and directs operations at The Sir Arthur Conan Doyle Centre in Edinburgh.  She has successfully performed at The Edinburgh International Festival Fringe, the biggest arts festival in the world, five years in a row and is currently writing her first book.

The Royal Geographical Society - Hong Kong wishes to express its thanks to Jacada Travel for its generous assistance with this talk.