The form #73 does not exist or it is not published.

Dr Austin Gallagher
Tuesday, 9 Oct 2018
Google Calendar Outlook Calendar
Complimentary Drinks Reception 6.30 pm; Talk 7.30 pm
6/F Three Pacific Place, 1 Queen's Road East
Pre-payment. Please scroll down.
Sharks are one of the oldest, at 420 million years, as well as most thrilling predatory species in the world and have fascinated humans for centuries. In this talk marine biologist Dr Austin Gallagher tells of these exceptional predators and shows that they are also severely threatened by human influence. He describes the remarkable work he is doing with his team to reverse the decline of global shark populations and raise awareness for ocean conservation. He also shares some of the illuminating aspects of using modern technology in conservation, as well as some exciting stories of his personal encounters with sharks. 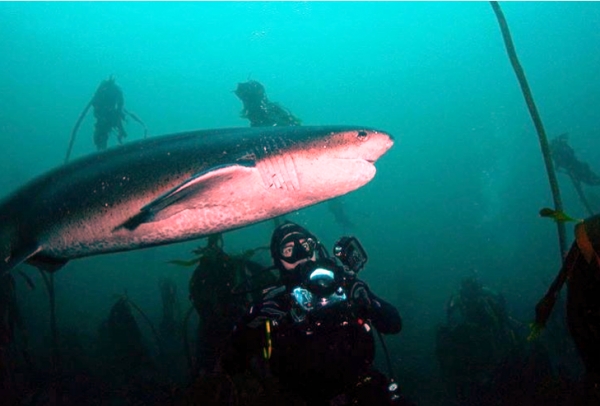 Over 100 million sharks are killed annually for their fins and meat, and many species are in severe decline today.  Collecting scientific data on shark biology and behaviour had been a challenge until recently.  Dr Gallagher and his team have been able to employ cutting-edge tracking devices to gain new insights about sharks which are essential for conservation efforts at the global scale.  Using satellite data, it is not only possible to track sharks, but also the fishing boats that hunt them, from space.  The data also allows him and other marine biologists to study the daily lives and social networks of sharks for the first time.

Dr Gallagher is the Chief Scientist and CEO of Beneath the Waves, a non-profit organisation that combines modern technology with crucial ocean and shark conservation work.  Beneath the Waves launched an online documentary series entitled The Global Connection to raise global awareness for the importance of shark conservation.  Their work spans from the United States and Canada throughout the Caribbean, Africa and Asia.  Dr Gallagher speaks on the importance of a global approach to shark conservation, that is driven by scientific data evidence.  The scientific work conducted by Beneath the Waves has been translated into global protections and regulations for at-risk marine species.

Dr Austin Gallagher hails from the United States, obtaining a BA in Biology from Loyola University, Baltimore, a MA in Marine Science from the North-eastern University, Boston and a PhD in Environmental Science and Policy from the University of Miami.  Before his work at Beneath the Waves, he worked as an academic researcher and has published more than 60 peer-reviewed scientific publications since 2010.  He is an Adjunct Assistant Professor at the University of Miami’s Marine School and was listed on the Forbes 30 Under 30 List in 2016.

their generous support on this talk.