The form #58 does not exist or it is not published.

Andrea Oschetti
Thursday, 12 Jul 2018
Google Calendar Outlook Calendar
UBS, 52/F, Two International Finance Centre, 8 Finance Street, Central
Pre-payment. Please scroll down.
The Royal Geographical Society is delighted to welcome Andrea Oschetti to speak about his winter expedition to the remote region of Dolpo in Nepal. A chef, travel writer and photographer, Mr Oschetti vividly describes his rare experience of crossing the Himalayas by foot in the winter, to find the Snow Leopard and visit an ancient Tibetan library. Together with a Nepalese mountaineer, Mr Oschetti began his journey into Dolpo, encountering sights including a 1,000-year-old man-made cave and a red desert on his way. 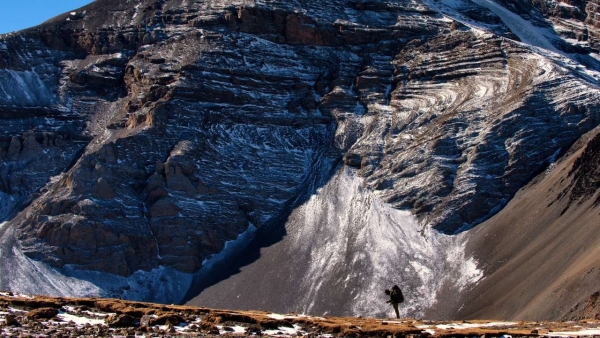 Eager to explore the Himalayas in winter after being inspired by the work of Peter Matthiessen, author of the acclaimed book The Snow Leopard, Mr Oschetti followed in the footsteps of the explorer to find the elusive animal.  They faced many challenges throughout the journey, one of which was earning the trust of the locals— a feat eventually gaining them access to the region’s sacred texts.  Mr Oschetti describes the intimate moment when a young Lama took the adventurers into his home while they waited for the key to the ancient library to be presented to them.

The Tibetan library contains more than six hundred volumes of Tibetan manuscripts, ranging in date from the late 11th to the early 16th century, many containing illuminations of scenes from the life of the Buddha.  The manuscripts, sculptures and mural paintings are emblematic of the complex economic, political, artistic and religious interactions between the people of Dolpo and their neighbours in India, Nepal and Tibet. The study of these elaborate works has shed light on the rich history of this remote Tibetan enclave and provided insight into the spread of Buddhism throughout the Himalayas.

Their sense of adventure persisted following their visit to the library as they went on to attempt to locate the Snow Leopard, a creature that has captivated explorers and locals alike for centuries.

Hailing from Italy, Andrea Oschetti read for a MBA in Management at the Universita Cattolica del Sacro before taking a MA in Anthropology at Chinese University of Hong Kong.  Mr Oschetti left the corporate world to open a private kitchen, hosting more than 1,000 exclusive events over the past eight years.  Mr Oschetti travels professionally, working as a journalist for travel media companies such as CNN and The South China Morning Post, searching for enriching experiences around the world and retracing the steps of inspiring historical figures.  He was awarded the First Prize in the prestigious Nikon International Photographic Contest in 2005 for his work from the road.  In 2016, Mr Oschetti founded Blueflower, a travel company for those with a thirst for adventure.​

The Royal Geographical Society - Hong Kong wishes to express its thanks to UBS for its generous assistance with this talk.