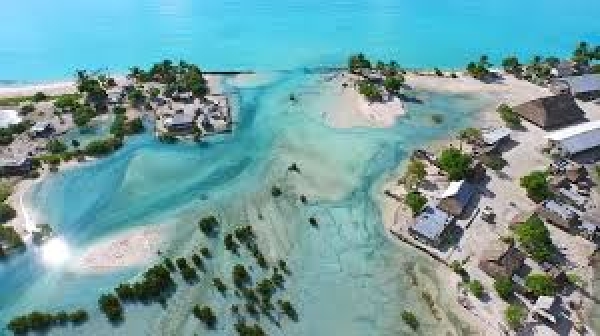 The Royal Geographical Society is pleased to join a film screening of “Anote's Ark”, a fascinating documentary film about the travails of Kiribati. Kiribati is a Commonwealth country in the central Pacific Ocean straddling both the equator and the International Date Line. Its 120,000 inhabitants live numerous atolls and islets, at severe risk from sea level rises.

‘Anote’s Ark’ is the first feature film directed by Matthieu Rytz, a filmmaker and photographer specialising in visual anthropology. After initially being exposed to the plight of the people of Kiribati about to see their very land disappear during a visit to the Kuna Yala archipelago in 2012, Mr Rytz decided to document the lives of the citizens of this country.

In ‘Anote’s Ark’, he follows the country’s President, Anote Tong, on his journey through international halls of power and climate conferences leading up to COP21. President Tong attempts to get his message of slowing climate change heard loud and clear by political and economic leaders while fighting to protect his people, while numerous citizens in Kiribati are already seeking refuge abroad.

President Anote’s fight is intertwined with the extraordinary fate of Tiemeri Tiare, a young mother of six who is forced to relocate to New Zealand with her family. Through these people, Mr Rytz explores issues related to the survival of Tiemeri Tiare’s family, of the population of Kiribati as a whole and of 4,000 years of Kiribati culture.

The Royal Geographical Society – Hong Kong wishes to express its thanks to Jacada for its generous assistance with this event.