The Bicycle Diaries: One Woman Cycling from London to Tehran

Rebecca Lowe
Tuesday, 27 Feb 2018
Google Calendar Outlook Calendar
Complimentary Drinks Reception 6.30 pm; Talk 7.30 pm
27th Floor Jardine House, One Connaught Place, Central
Registration method: Register at the event
The Royal Geographical Society is pleased to welcome Rebecca Lowe to Hong Kong to speak on “The Bicycle Diaries: One Woman Cycling from London to Tehran". Rebecca Lowe cycled for 11,000km on her journey to Tehran, with little prior training, 60kg of luggage and a ukulele. She visits the RGS to tell the tale of her life-changing adventure, from collapsing from thirst in the Sahara to being stalked by security forces in Egypt and hitting the underground party scene in Iran – and ultimately discovering a world of greater warmth, colour and complexity than she could ever have imagined. 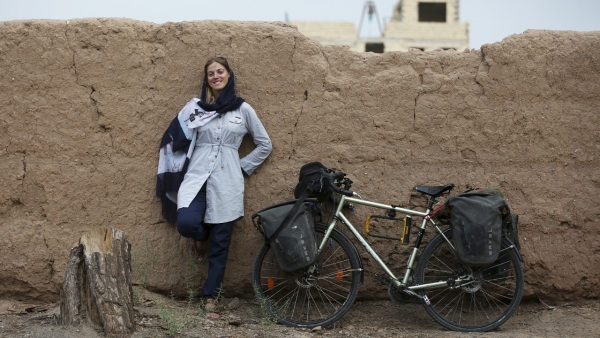 Not everyone had faith in her ability to do so, however.  Her family and others were convinced that she would be captured or injured by ISIS or other extremists.  Some even suspected she was on her way to join them.  Accompanied only by Maud, her trusty but ever-insubordinate bicycle, Rebecca spent a year on the road hoping to prove these people were wrong.  Travelling through Europe, Turkey, Lebanon, Jordan, Egypt, Sudan, Oman, the UAE and Iran, she stayed with mullahs and atheists, refugees and revolutionaries, niqab-clad women and jalabiya-robed men.

Her aim was simple: to challenge preconceptions about the Middle East and tell the real-life stories of people who live there.  Mostly she hoped to show that the bulk of the region is far from the morass of violence and fanaticism many people believe – and that a woman could cycle through it safely.

The strength and fortitude of women was an enduring refrain throughout the trip.  In Cairo, a group of female doctors fought back against the regime when it shut down their anti-torture NGO.  In Tehran, a female human rights lawyer was one of the few people still speaking out against the Islamic Republic.  On the Turkish-Syrian border, an activist explained how she and other women had brokered a ceasefire between armed forces in the Syrian town of Madaya while battling starvation and the destruction of their homes.

Rebecca Lowe read English literature at Cambridge University and received an MA in journalism from Stanford University, where she was awarded a scholarship.  Before embarking on her trip, Rebecca was the Senior Reporter at the International Bar Association, specialising in human rights and the rule of law.  She developed a strong interest in the Middle East during the Arab Spring, and has since reported extensively on the region.  She now works as a freelance journalist in London, and has written for the BBC, Guardian, Sunday Times, Independent, Economist, Huffington Post, Evening Standard, Spectator and numerous travel and sports magazines.

The Royal Geographical Society – Hong Kong wishes to express its thanks to Clifford Chance for its generous assistance with this event.