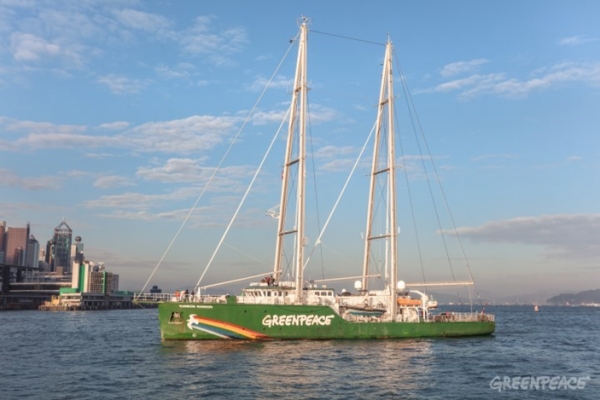 In the talk, Ocke Deutschmann shares his experience as Chief Mate of Rainbow Warrior III and Skipper of Beluga II, two of Greenpeace’s motor sailing research vessels.  He describes the unique specifications of the Rainbow Warrior III, including its helipad and hangar.  By contrast, Beluga II is a traditional European sideboard motor-sailing vessel, capable of oceanic voyages and navigating the shallow tidal waters of the North Sea coasts with special skills required to sail her.

This is a rare opportunity to hear a hands-on account, from keel to masthead and from stem to stern, of the work of navigating and managing large ocean going research motor-sailing vessels dedicated to oceanic scientific research.  Mr Deutschmann shares his experiences of ship management and blue ocean seafaring with a mixed crew of volunteers, scientists and professional seafarers.   He describes the level of multi-tasking skills required for this kind of role, including being in charge of the crew, accommodation, the captain's representative in his absence, taking numerous scientific samples, liaising with campaigners and action coordinators.  This is particularly the case since all crew must be committed to the tasks and values of Greenpeace.  Overall, Rainbow Warrior III provides a platform for the actions and endeavours of Greenpeace and is the perfect spotlight for public attention.

Katherine Ma then talks about Greenpeace’s research and work on the environment especially the plastic ocean.  At present, an estimated 12.7 million tonnes of plastic end up in the world’s oceans each year with plastic damaging the oceans severely and even threatening human health.

Ms Ma discusses what Greenpeace is doing locally and globally to reduce this.  She also talks of what is happening in Hong Kong and worldwide to tackle plastic pollution and of the progress so far.  She also considers what the roles are of the public, corporates and governments in this and how they interact with campaign groups such as Greenpeace.

Ocke Deutschmann was originally the first mate on Undine, a German social work sailing schooner.  He then moved to work as a Nautical Watch Officer at Hapag Lloyd .  Since 2011, he was an officer with Greenpeace International on Arctic Sunrise, Rainbow Warrior and Esperanza.  In 2017, he had a first command as Captain on Beluga II Greenpeace Germany's coastal campaigning vessel on a voyage through Scotland for launching the Plastics Free Oceans campaign there.

Katherine Ma is a Senior Campaigner at Greenpeace. Over the years, she has worked on environmental protection from development and awareness building and education programs, to campaigns on corporations and government for stronger environmental commitments.  She initially worked with Earthwatch, through launching citizen science programs about phenology to the Hong Kong public, students and corporations.  Ms Ma joined Greenpeace as Senior Campaigner in 2016.  Since then, she has been driving plastic campaigns, including a success in halting the sale of personal care and cosmetic products with microbeads in leading retailers.   She graduated from the University of Hong Kong with a Bachelor's degree in Geography and holds a Master's degree in Environment and Sustainable Development from University College London, focusing on environmental justice.