The Royal Geographical Society is pleased to welcome Canadian ultramarathon runner and women’s sports advocate Stephanie Case to speak on "Free to Run : Keeping Sport Going During War".  In the lecture, Ms Case tells of her own career as an accomplished ultrarunner, then focuses on her efforts for access to sports in some of the most difficult places on earth, including her personal work in Afghanistan, South Sudan and Gaza to keep sport going in difficult wartime circumstances, particularly for women. 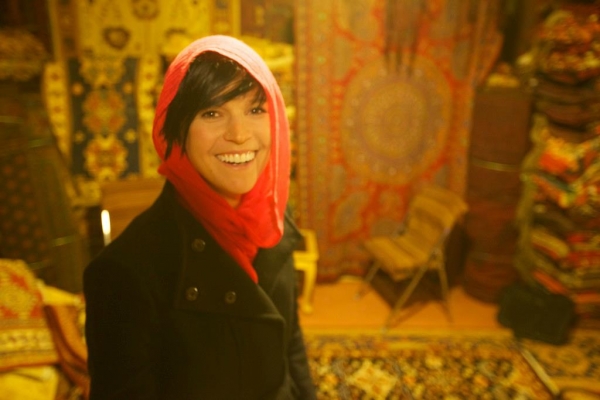 In 2009, Ms Case gave up her career in corporate law to pursue a longstanding desire to assist some of the world's most vulnerable populations, particularly to empower young women. From the jungles of Ecuador to the deserts of Afghanistan, she has worked all over the world providing direct assistance to communities in need.  During 2014, she lived in a tent in South Sudan, helping to assist tens of thousands of people displaced by the conflict.  She now works for the UN Office of the High Commissioner for Human Rights in Gaza, where she trains for her athletic events under extremely difficult security restrictions.

Stephanie Case is the President and Founder of Free to Run, a charity that uses sport to empower women and girls from conflict-affected areas.  In the lecture, she explains how she started the charity and the incredible stories and adventures that have come out of Free to Run’s programmes, particularly from the women and girls who are involved in sport, persevering against all odds.  Free to Run operates outdoor hiking and running programmes in Afghanistan and other war-torn countries and also works with refugee populations in Hong Kong, providing much-needed access to sports and fitness.  Running, physical fitness and outdoor adventure are used as a means of empowering and educating conflict-affected communities and for women to overcome the harmful effects of gender, religious and ethnic discrimination.  Particularly in war-torn or post-conflict countries, sport activiti es are extremely limited or even non-existent due to a lack of resources and lack of security.  Female Afghanteams have now completed successfully in races in the Gobi Desert and Sri Lanka.

Stephanie Case hails from Ontario, Canada, where she read psychology and international development at Queen’s University before studying law at the University of British Columbia.  An avid ultrarunner, Ms Case uses her athletic adventures to raise funds and awareness for women in sport.  She has won a number of international running events from the Swedish Arctic, to the Gobi desert, to the French Alps.  Her accomplishments include first place in the prestigious Vermont 100-mile race and numerous wins in multi-day races around the world.  Previously a successful corporate and human rights lawyer, Stephanie Case is now President of Free to Run and works as a human rights officer for the UN Office of the High Commissioner for Human Rights.

The Royal Geographical Society - Hong Kong wishes to express its thanks to Freshfields Bruckhaus Deringer for its generous assistance with this event.