The Herschel Space Observatory: Exploring the Origins of Stars and Galaxies 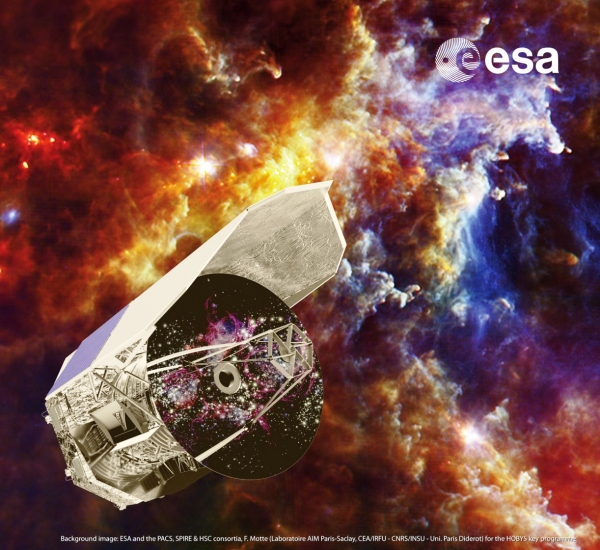 The Royal Geographical Society is pleased to welcome Professor Matthew Griffin to lecture on “The Herschel Space Observatory: Exploring the Origins of Stars and Galaxies”.  The astonishing Herschel Space Observatory, which Professor Griffin played a major part in building, was launched by the European Space Agency in May 2009.  In this lecture, Professor Griffin explains about the Herschel spacecraft and its instruments, and highlights some examples of its scientific achievements.

The Herschel Space Observatory carried a 3.5-metre diameter telescope, the largest telescope yet to be launched, and three sensitive scientific instruments, which needed to be cooled to temperatures near absolute zero.   The telescope worked at far infrared wavelengths, about 100-1,000 times longer than the wavelengths of visible light.  Astronomical radiation in the far infrared originates from interstellar clouds of gas and dust from which stars can form.  Star formation is a complex process that is obscured from human view at visible wavelengths by the surrounding cloud.

However, far infrared radiation can penetrate the cloud allowing scientists to observe star-formation in action.  Herschel’s main scientific goals were therefore to investigate star formation in the Earth’s galaxy today and the formation and evolution of whole galaxies of stars throughout the history of the Universe.  The Herschel Observatory worked very well and has produced many spectacular results and an enormous amount of scientific data, which will continue to be analysed by astronomers for years to come.

Professor Griffin reveals some of its initial findings, including how stars tend to form along pronounced structures that emerge from turbulent motions in giant interstellar clouds.  He discusses how the process of star formation in a galaxy can be “switched off” when a powerful outflow from the centre of a galaxy blows away the interstellar gas, the raw material from which stars form.  He also shows how Herschel was able to look back in time to the formation of galaxies in the very early Universe to understand the origin of the Universe as seen today.

Professor Matthew Griffin is Head of the School of Physics and Astronomy at Cardiff University, and a member of the Cardiff Astronomy Instrumentation research group.  He read Electrical Engineering at University College Dublin and, after a spell working in industry, went on to study Astrophysics at Queen Mary College, University of London.  His research work has included the development of infrared wavelength instrumentation for both ground-based and space-borne observatories, and the study of planetary atmospheres, star formation and galaxy evolution, as well as the Earth’s atmosphere.  He led the multinational team that built and operated SPIRE, one of the three scientific instruments onboard the Herschel satellite.