The Royal Geographical Society is pleased to welcome Dr Andy Lewis to speak on “Australia: From Coral Reef to Rock Art”.  In the talk, Dr. Lewis speaks about his two passions in Australia, its extraordinary coastlines plus the amazing environments of the Kimberly region.  In the lecture, illustrated by stunning photography, he illustrates the landscapes, the cultural history and the natural history of these regions, with imagery of both terrestrial and marine environments. 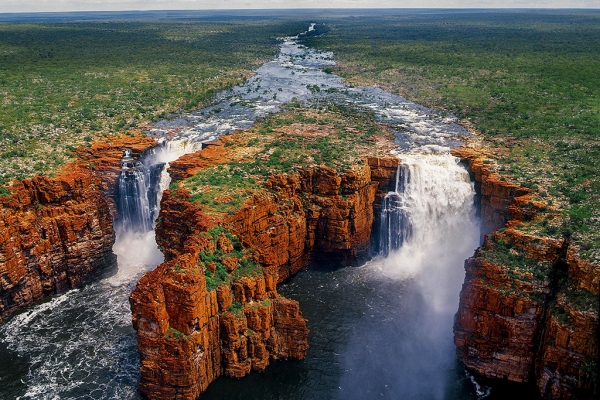 He starts by speaking of the island environments on the West Australia coastline, which has more than 1,000 islands, from the Great Australian Bight to the Kimberley Coast.  Many of these islands have been separated from the Australian mainlands for over a million years, leading to speciation.  The islands cover numerous different rock types and biospheres, preserving species becoming extinct on the mainland.

He goes on to talk about the famous Kimberly region.  In 1837, with support from the Royal Geographical Society, Lieutenants Grey and Lushington sailed on the schooner Lynher from Cape Town to survey this extraordinary area and named the region after the Secretary for the Colonies, Lord Kimberly.  The rugged and varied sandstone landscape of the Kimberly is home to a distinctive mixture of wildlife, which has been thoroughly mapped and described.  Animals found here include the huge saltwater crocodile and a rich variety of birds.  The spectacular sandstone gorges of north Kimberley are an important refuge for many species.

The human occupation of Australia, including the migration pathways out of Africa, is best illustrated by the Kimberley rock art and its implications for human adaptations to climate change.  The Kimberley’s rock art is the oldest art known to mankind.  The earlier art consists of crude animal drawings that are believed to be up to 40,000 BP.  The famous “Bradshaws” are of more recent origin and first appeared following the peak of the most recent Pleistocene glacial maximum, dated between 26,500 and 20,000 years BP.

Dr Lewis then speaks of the pristine coral atolls of the Rowley Shoals, south of the Timor Sea, west of Broome on the northwestern Australian coast.  He also speaks in detail about the formation and situation of the Great Barrier Reef.  This includes the composition and ecology of the region's coral reefs, from the southern platforms of the Abrolhos through the Rowley Shoals and other significant biodiversity hotspots.

Dr Andrew Lewis read marine biology at James Cook University, Australia, where he received his PhD for research into the population dynamics of reef fishes and their responses to coral disturbance.  Over the course of his doctorate, Dr Lewis made more than 220 voyages to his study sites on the outer Great Barrier Reef.  He then moved to Magnetic Island on the Great Barrier Reef and set up his own consultancy firm, Reef EcoTours, offering coral advisory services.  Dr Lewis is a distinguished underwater photographer, actively involved in using his extensive image library to raise awareness of coral reef conservation issues.  He is the Consultant Marine Biologist for North Star Cruises and a Consultant coral reef ecologist for the BBC Natural History Unit and speaks widely.

The Royal Geographcial Society - Hong Kong wishes to express its thanks to:
Country Holidays which has most generously brought Dr Andy Lewis to Hong Kong.