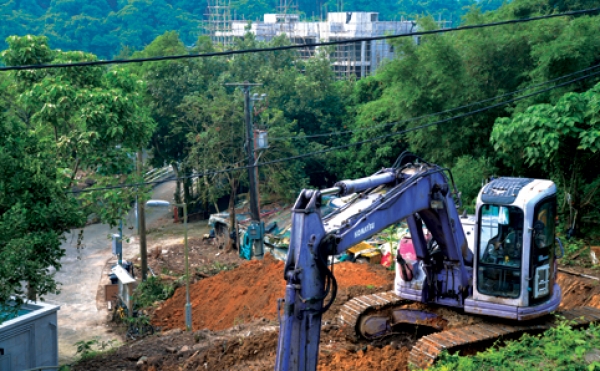 The Royal Geographical Society is pleased to welcome Dr Martin Williams to speak on "Hong Kong’s Country Parks:  the Glories and Threats”.  In the talk, Dr Williams explains how Hong Kong is a startling example of a place combining metropolis with wilder areas.  One oft quoted statistic is that over 40 percent of land is designated as Country Park, more than any other country or territory.  There are hills, forests, extensive coastlines, islands, and a wealth of biodiversity including around 500 bird species, well over 100 species of reptiles and amphibians, which is similar to Florida, and 300 native trees, almost ten times Britain's total.

Yet he argues that while there is much that is marvellous, and some conservation successes like the establishment of country parks, regeneration of sub-tropical forests and Mai Po Marshes Nature Reserve, there are threats.  These include developments, and a slew of ongoing and possible projects which threaten wilder areas, especially in lowlands.

Dr Williams reviews a few grim tales, like the despoliation of the Yuen Long plain.  More importantly, he mentions current issues, such as threats that small houses pose to places as far flung as Hoi Ha and Shap Long, grander schemes like the Baroque for Lamma and the government's plans to expand Tung Chung.

Dr Williams has long tried promoting nature tourism as a way to stem developments and explains how nature tourism is hard to achieve but still has potential.  Resurgent farming might help too.  He also remarks on changing attitudes of Hong Kong people, perhaps leaving government and some businesses stuck in the past, yet none-the-less powerful.  Dr Williams wants to encourage the people of Hong Kong to get out, and relish the wealth of wild wonders the territory has.

Dr Martin Williams hails from Yorkshire, England, and during his teens became an avid birdwatcher.  While reading for a PhD in physical chemistry at Cambridge University, he led two pioneering surveys of bird migration at Beidaihe, east China. These led to Dr Williams moving to Hong Kong in 1987.

Dr Williams is a freelance expert in fields including writing, photography and film making, aiming to boost conservation through the media.  He has written and photographed features for Action Asia, Discovery, National Wildlife, Reader’s Digest and the South China Morning Post, and worked on books such as Hong Kong Pathfinder: 24 day-walks in Hong Kong, The Green Dragon: Hong Kong’s living environment, Central Ridge and West, and his recently published Enchanting Hong Kong.  Dr Williams co-produced Explore Wild Hong Kong!, a film sponsored by Cathay Pacific, and made short films on Hong Kong places, including Hoi Ha and coastal sites on Lantau Island.  He is webmaster of sites including Hong Kong Outdoors, and is involved in various environmental issues in Hong Kong.