Behind the Lines in Afghanistan: The Myth and the Reality of being a War Artist

The Royal Geographical Society is pleased to welcome Mark Neville to speak on "Behind the Lines in Afghanistan: The Myth and the Reality of being a War Artist’.  In the talk, London-based artist Mark Neville describes how, in 2011, he spent three months working on the front line in Helmand, Afghanistan as an official war artist.  He had previously been published widely both for art and documentary, but his experiences in Afghanistan were to have a profound effect upon his work.  In this lecture, Mr Neville explores the myths and realities of being a war artist, discussing their relevance in the modern age and how his war art relates to his practice as an artist in general.  In his talk, Mr Neville is also going to screen a short film he made on location, which has been featured in a major solo show at the Imperial War Museum, London. 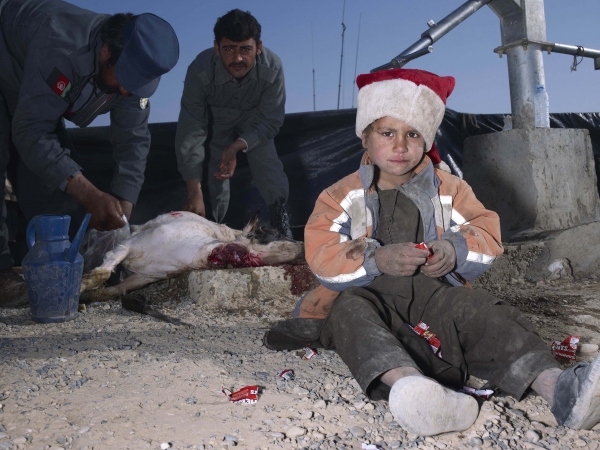 Mr Neville discusses how the realities of life on the frontline and the real motives governments have for going to war are so far removed from the reports that are fed through the media, both in terms of what receives coverage and how it is covered.  The media gave little coverage to the huge amount of reconstruction that the British Army was initiating whilst he was there. This included a massive investment by both the Ministry of Defence and the Department for International Development in building roads, bridges, schools and hospitals.

More disturbingly, during his time in Helmand, soldiers were losing limbs every day, sometimes three or all limbs.  These devastating injuries were barely reported in Britain, making his war art all the more important.  He describes how Camp Bastion was the busiest trauma hospital in the world at that time, with the expertise of modern surgeons inadvertently helping to make the foreign soldiers’ presence in Afghanistan more palatable for their civilian populations.  His talk explores this gap between media myths and reality, as seen through his war art.

Mark Neville read Fine Arts at Reading University, Goldsmiths' College in London and the Rijksakademie in Amsterdam, Netherlands.  Mr Neville works at the intersection of art and documentary, investigating the social function of film and photography.  Mr Neville first became well known for his Port Glasgow Book Project, after he spent a year as artist in residence in Port Glasgow portraying the town's hardship of Scotland’s post-industrial decline.  During 2012, the Andy Warhol Museum exhibited a group of newly commissioned photographic works by Mr Neville, which focused upon issues of race in Pittsburgh.  In the same year, The New York Times Magazine commissioned Mr Neville to make the critically acclaimed photo essay Here is London, which was subsequently nominated for the Pulitzer Prize.  Mr Neville's work is in many public and private collections, including those of the Arts Coun cil of England, Kunstmuseum Bern, the National Galleries of Scotland and the Scottish Parliament.  His work can also be seen in a large retrospective of British photography which is running in Shenzhen during May 2015.