Planetwalk: The Past, Present and Future

The Royal Geographical Society is pleased to welcome Dr John Francis to speak on "Planetwalk: The Past, Present and Future".  The event starts with a short performance by Dr Francis on the banjo.  The talk covers Dr Francis’s unusual mission, which has included 22 years of walking around virtually the whole of the Americas and 17 years of silence, to promote sustainability and environmentalism, and the founding of Planetwalk.org, his well-known charity.  He goes on to talk about the early development of Planetlines, the Planetwalk Education Curriculum, that over the next year is to develop into "The Walking Campus", a global initiative. 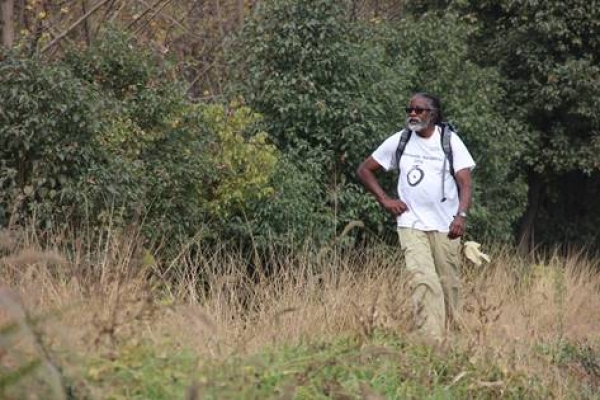 Since witnessing a disastrous oil spill off the coast of California in 1971, when two oil tankers collied in San Francisco Bay, Dr John Francis has been on a “journey”.  During the next 22 years, he refused to ride in any motorised vehicles, in attempt to lead others to respect the environment.  He subsequently decided to stop speaking, which he maintained for 17 years.  In this talk, Dr Francis tells the story of how his walk and period of silence began and what he discovered as he made his way on foot across the United States and the length of the South American continent.

He continues with an exploration of how his mission has continued even after he began speaking again, and subsequently started riding and driving in motorised vehicles.  The foundation of Planetwalk.org and Planetlines, the Planetwalk curriculum, has not only continued to carry Dr. Francis’s message around the world, but it has allowed his personal message to reach millions of others.

Now, on his third trip to China and Asia in just a year, Dr. Francis is going to walk across China as part of 'The Walking Campus', Planetwalk's new global initiative and next step into the future.  This has strong ties and potential to grow in China and Asia but is also global in its ambition.  For example, Dr Francis would like to support several schools around the world in establishing walking campuses, a mobile learning experience that takes full advantage of real-world, real-time learning opportunities that present themselves while walking.

Dr John Francis hails from Philadelphia, USA, and holds a doctorate in Land Management from the University of Wisconsin.  He also hold degrees from the South Oregon University and the University of Montana.  In 1991, he was named a United Nations Environmental Programme Goodwill ambassador.  In 2009, he walked the Great Ocean Road for a film made by Tourism Victoria, Australia.  He is the author of the book Planetwalker: How to Change Your World One Step at a Time.  He presently resides in California, USA.

Members of the RGS and their guests are most welcome to attend this event, which is HK$150 for RGS Members and HK$200 for guests. and others.