The Great Escape from Hong Kong

The Royal Geographical Society is pleased to welcome again Tim Luard to speak on “The Great Escape from Hong Kong”.  In this lecture, well-known former BBC China correspondent Tim Luard gives an illustrated talk on the dramatic escape through Japanese lines of the one-legged Chinese admiral, Chan Chak, and a large group of British companions, on Christmas Day, 1941.

In one of the most remarkable adventures of the Second World War, just hours after Hong Kong’s surrender at the end of 17 days of fighting, Admiral Chan and more than sixty British intelligence, naval and marine personnel staged a daring breakout through the enemy blockade. As others prepared for long years of occupation, they swam through Japanese gunfire, went by torpedo boat through the night to Mirs Bay and marched for days across occupied China to freedom. 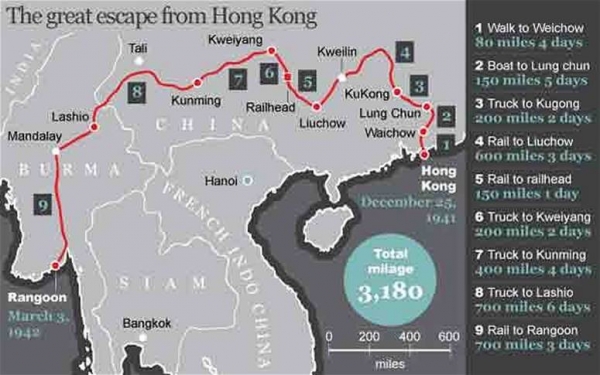 The admiral, China’s senior representative in the colony, lost his wooden leg as he swam through a hail of gunfire.  Local guerrillas helped carry him in a bamboo sedan chair together with the rest of the party over the hills and rivers of Guangdong beyond the mountains to Huizhou.

In this lecture, Mr Luard gives a fascinating talk on the epic escape, including about who the various members of the party were and how they came to be among the lucky few who got away, as the rest of the colony prepared for long years of Japanese rule.  The talk features rare photos from the escape showing such places as Aberdeen and the adjacent island of Ap Lei Chau, where the escape group came under heavy fire and had to abandon their original boat.  After finally landing on the mainland, they marched for days over the hills and rivers of with local guerrillas carrying the wounded admiral.  Mr Luard has personal knowledge of the route, having retraced the initial part on foot from Hong Kong to Huizhou.

Tim Luard read Chinese at Edinburgh University and spent the next seven years in Hong Kong, where he wrote for local and international media.  He then joined the BBC and was Beijing Correspondent for World Service Radio in the 1980s, travelling widely in China and covering the events in Tiananmen Square in 1989.  He spent a further 17 years with the BBC as a presenter and editor of current affairs programmes such as East Asia Today and The World Today.  In 1997, he made an acclaimed 6-part radio series on the history of Hong Kong to mark the handover.  He also wrote an accompanying book, Hong Kong: Imperial Orphan and has recently published the book, Escape from Hong Kong, on which work has also begun on a film.

Members of the RGS and their guests are most welcome to attend this event, which is HK$150 for RGS Members and HK$200 for guests and others.  This event is free of charge for any attendees under 18 or for students.