The Royal Geographical Society is pleased to welcome Chris Taylor to lecture on "Riding the Dragon".  In this lecture, Mr Taylor tells of how he first visited Beijing in the depths of winter to see the Great Wall and has returned to China dozens of times since, having now visited all 33 provinces and regions of China.  This took him to the jungles of Yunnan, the polluted great cities, the mountains of Tibet, the deserts of Gansu and the casinos of Macau.  In this finely illustrated lecture, he describes these travels and adventures.  In addition to discussing everything from the landscapes to the various problems of China, he also comments on the unfailingly generous and resilient people, plus the solitude and wide open unspoiled spaces of a nation with an astonishing variety of natural beauty. 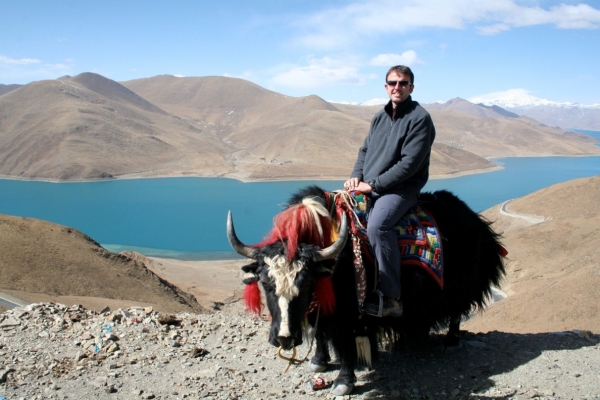 Mr Taylor argues the world cannot afford to get China “wrong” and this lecture also contributes to the current debate about the growing power of a country that many in Hong Kong and the West have misgivings about, and even equate with threat.  The lecture though is no apology for China’s more unpleasant aspects, but Mr Taylor asserts that it is necessary to understand that the nation is more than the sum of its crises and disasters, and more also than the autocratic and corrupt government system its people continue to endure.

While Mr Taylor has an enduring affection for China, the lecture is no “weak-at-the-knees” exaltation.  He addresses how China can be capricious, unpredictable and exasperating, and at times unhelpful, bossy and inclined to authoritarianism.  Mr Taylor discusses that China has numerous problems, of which corruption, separatism and destruction of the environment are probably the chief, but that overall during the last three decades she has made rapid strides.  But the real China for him is moments such as when a shaft of sunlight hits a deserted temple courtyard, the wind blows a flurry of sand from a Gobi desert dune, the sun slowly rises over the Himalayan foothills or the ice sparkles on a frozen river in the North and his affection is renewed, reminding him that though China is the most populous nation on earth, she is far from the most densely populated.

Chris Taylor hails from Norwich, England and read History at the University of York.  Following a period teaching in the United Kingdom, he came to Hong Kong as a teacher of European History.  He has resided in Hong Kong for more than ten years and quickly developed a passion for Chinese History, which he has studied for a decade.  He is the author of the book 'Riding the Dragon', which is the result of his extensive travels and has 33 chapters, one for every region of China.

The Royal Geographical Society is pleased to welcome Members and their guests are most welcome to attend this event, which is HK$150 for Members and HK$200 for guests and others, including a complimentary drink.