The Royal Geographical Society (with IBG) was established in the United Kingdom in 1830. For some 190 years, the Society has been a national and international focus of geographical research, information and exploration and is the largest scholarly geographical society in the world.

The Society has more than 17,000 Fellows and members in over 100 countries.The Society was founded by Royal Charter for the advancement of geographical science and has been among the most active of the learned societies since. In the new millennium, the Society has interpreted the Charter as a mission to be: “a world centre for geographers and geographical learning dedicated to the development and promotion of knowledge together with its application to the challenges facing society and the environment”.

Some of the most remarkable geographical discoveries, scientific explorations and feats of human endeavour have been initiated and supported by the Society. The search for the source of the Nile, exploration of Antarctica and great explorers such as Burton, Livingstone, Scott and Shackleton, are all inextricably linked with the Society, while it was a Royal Geographical Society expedition which first reached the summit of Everest in 1953.

The Society maintains archives of international importance, including a library, photographic collections, the largest private collection of maps in the world and documents, correspondence and diaries that record the history of geography and exploration since 1830.

Over 150 lectures and conferences are organised by the Society each year including a major residential conference and a renowned programme of popular weekly lectures for geography enthusiasts. There are numerous overseas field research awards and programmes, and a specialist unit, Geography Outdoors, is devoted to training for expeditions.

The Society also publishes three scholarly journals, two newsletters and a popular magazine (see RGS publications).  The Society is based in a spacious listed building in its own grounds in Kensington opposite Hyde Park, and operates 8 regional branches in the UK and 2 overseas branches in Hong Kong and Singapore.

In February 2001, Britain's Heritage Lottery Fund awarded the Society £4.55 million towards the cost of creating a major new facility designed to 'unlock the archives'. With these funds, the Society has constructed a state-of-the-art subterranean archive, together with teaching, consultation and research facilities and a new entrance pavilion on Exhibition Road. These complement on-line catalogues and Internet teaching resources, opening the Society's unique archives to Fellows and the public, extending their value into the foreseeable future. 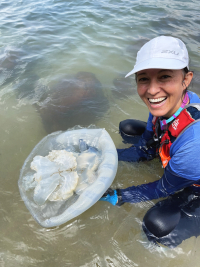 7 Feb 2023
When Charmian and Cathy decided to circumnavigate around the largest island in Hong Kong, they didn't know just how dramatic their coasteering journey would be.
Find out more